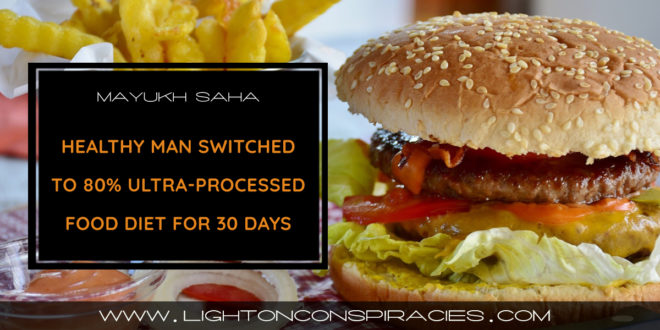 Healthy Man Switched To 80% ULTRA-Processed Food Diet For 30 Days, Here Is What Happened To His Body Most of the ready-made food we eat today is ultra-processed. As tasty as they may be, they can be even dangerous from a health perspective. There have been concerns that such ultra-processed food makes us crave more and eventually leads to obesity. Dr. Chris Van Tulleken, a television presenter and researcher, wanted to prove these concerns – using his own body as the test subject.

Dr. Chris filled 80% of his daily diet with ultra-processed food for 4 weeks. This means 4/5th of the foods being eaten are packaged and ready-made items like burgers, candy, chocolates, chips, and so on. If it sounds similar to your present diet, then Dr. Chris’ experience may be an eye-opener for you. The whole experience is available to watch as a mini-documentary.

The Effects Of The 80% Ultra-Processed Food Diet

In that 4 weeks, Dr. Chris’ weight had increased by nearly 7kg and had made him overweight. He estimates that, at that rate, in 6 months he would have gained 38kg. The weight was not the only visibly drastic change. Take a look at the video yourself:

Scans of Chris’ brain activity showed that the areas that control reward had become connected to the areas controlling automatic, repetitive behavior. This meant that his brain told him to eat ultra-processed food even if there was no need for it. The response was similar to when substances such as drugs, alcohol, and cigarettes are used addictively. The changes were not permanent, but Dr. Chris sounded an alarming warning: If a 42 year old’s brain was changed that much in just 4 weeks, imagine how children’s developing brains are affected.

We are yet to figure out the reason behind this effect of ultra-processed foods. Chris conjectures that it is primarily because of their constituting nutrients and the way they are processed.

Once You Start Eating, It Becomes Tough To Stop

In the documentary, Chris speaks with Dr. Kevin Hall, a National Institutes of Health senior investigator. He reveals that a study was made comparing two diets that had the same nutritional quantities but one was made up of about 80% ultra-processed foods. The study revealed that those who were given the ultra-processed diet ate about 500 calories more every day. In about 2 weeks, they gained about 1kg of weight. Blood tests showed an increase of the hormone that controlled hunger and a decrease of the one controlling how full we feel. The study suggests that this is how these foodstuffs encourage overconsumption.

Chris’ experience was in line with the findings of this study. He talks about finding himself “craving food much more often”. Some studies have shown that foods that have high fat and carbohydrate content can activate the areas in the brain that control motivation, emotion, and reward. A study based on brain imaging suggested that the more reward you experience from eating such foods, the more you will have to eat to maintain that enjoyment.

Read: A Study Is Hinting That Your Brain Might Remember Where You Left Junk Food Easier Than Healthier Snacks

However, Chris adds that he does not think that food companies intentionally want to make people obese. Unfortunately, the side-effect of extremely delicious ultra-processed food is that they are addictive.

Moreover, it is very difficult for most people to remove ultra-processed foods from one’s diet. Chris says that their convenience, availability, and marketing all add to them being present in some form in our daily diet. The key here is moderation. Rio Huntriss, a dietitian, says that occasionally enjoying such foods is not likely to have such a health impact. Just don’t make it everything you eat every day.