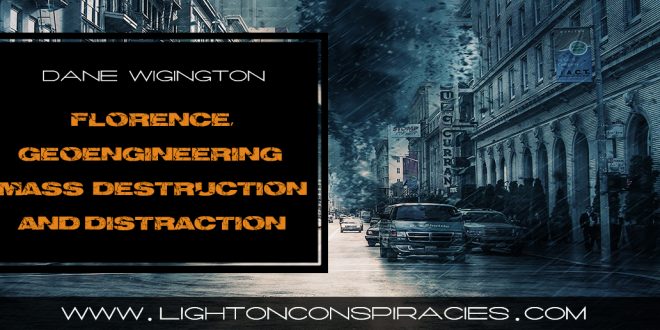 Will Hurricane Florence inflict the level of catastrophic damage that is being forecasted? Will the “forecasted” stalling of Florence parallel the Hurricane Harvey scenario to some degree? Or will a last hour change of direction and weakening of the storm diminish some or much of the predicted impacts? In either case, climate engineering is the core part of the equation that is not being acknowledged by any official source. Though nature is increasingly spawning hurricanes / cyclones due to Earth’s rapidly warming seas, massive global climate engineering operations (and associated technology) are increasingly able to manipulate and steer such storms. Early on forecasters somehow knew Hurricane Florence would follow a nearly straight line course to a specific region of the US East Coast. How did they know? Because they are reading a script that is passed down to them from up the ladder. A script that ultimately originates from climate engineering contractor Raytheon who does all the modeling for the National Weather Service (NWS) and the National Oceanic and Atmospheric Administration NOAA (both government agencies have an illegal federal gag order on them). The 5 minute video report below provides input on Hurricane Florence and some of the potential agendas behind the manipulation of this storm.

tinues to be ramped up around the world, Hurricane Florence is only one example of hurricane / cyclone manipulation. Super Typhoon Mangkhut is predicted to possibly become the most powerful storm since record keeping began. Mangkhut will impact the Philippines and even Hong Kong. Will US mainstream media even cover this? How many other dire global news issues will be omitted due to the coverage of Hurricane Florence? Is that a part of the agenda being carried out? Though countless forms of human activity are decimating and derailing the climate system, geoengineering programs are single greatest climate disrupting factor. The continued mainstream media cover-up of illegal climate engineering operations makes them accessories to these crimes. So called “elected officials” must also be considered accessories to the climate engineering crimes due to their complete refusal to address or acknowledge this most critical threat. If there is any chance whatsoever of exposing and halting the climate engineering assault, it is up to us. All of us are needed to help sound the alarm, sharing credible data is key. Reaching a critical mass of climate engineering awareness is the only way forward, we must all make our voices heard.
DW

May be freely reprinted, so long as the text is unaltered, all hyperlinks are left intact, and credit for the article is prominently given to GeoengineeringWatch.org and the article’s author with a hyperlink back to the original story.