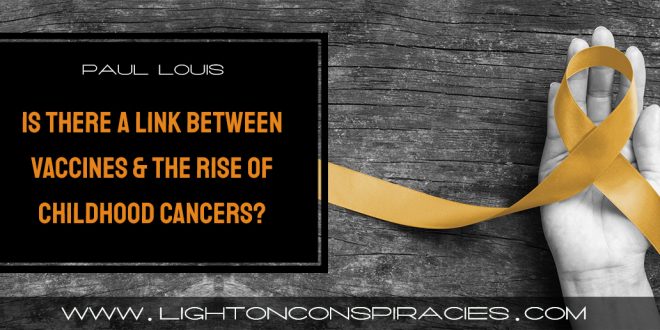 Is There a Link Between Vaccines & the Rise of Childhood Cancers?

Have you seen the St. Jude Children’s Hospital fundraising commercials on TV? This hospital specializes in pediatric cancer. You may be wondering why so many young children are being diagnosed with cancer. This wasn’t happening a few decades ago.

According to a 2016 UK Telegraph science editorial, childhood cancers have increased 40 percent over the past 16 years, especially among teenagers. Since that report, cancer cases among infants and toddlers have continued to climb.

“For American children ages one through 14, cancer is the top disease-related cause of death, second only to accidents among all causes of childhood mortality. Leukemia and malignancies of the central nervous system are the most common types of childhood cancers. (Source)

This article will discuss findings that link childhood vaccines to the increased cancer rates among the very young. The explosion of childhood cancers correlates with the increase in vaccination schedules for children during the 1990s up to today.

How Cancer is Created When Normal Cellular Metabolism Fails

Shortly before 1930, Nobel Prize-winning German biochemist, Otto Warburg, discovered that cellular oxygen insufficiency results in a metabolic shift, where cells resort to fermenting glucose for energy instead of using oxygen to metabolize glucose and other nutrients.

This conversion from cellular respiration to glucose fermentation is a cell’s survival mechanism. Unfortunately, the cells survive as cancer.

Based on his research, Warburg postulated that cancer is a metabolic disease. His findings confronted the unproven theory of mainstream oncology, which claims cancer is the result of genetic mutations.

“Cancer, above all other diseases, has countless secondary causes. But, even for cancer, there is only one prime cause. Summarized in a few words, the prime cause of cancer is the replacement of the respiration of oxygen in normal body cells by fermentation of sugar.” – Dr. Otto Warburg (Source)

Deep within in each cell within our body are tiny organelles called mitochondria that use oxygen respiration to metabolize nutrients to release ATP, (adenosine triphosphate), the basic fuel that provides the body’s energy. ATP is the “gasoline” that runs the engine.

Watch this short video to understand the relationship between mitochondria and ATP.

Mitochondria also play a role in cell death called apoptosis, a process that eliminates old or damaged cells and replaces them with new cells. This essential function is hampered when the cell’s mitochondria are damaged. If a cell never dies, it is referred to as an “immortal cell” – which is cancer. Cancer cells are resistant to apoptosis due to their metabolic processing: glucose fermentation.

“Mitochondrial dysfunction and metabolic problems are features of cancer, ASD and other neurodegenerative diseases”. (Source)

Dr. Gary G. Kohls, a retired physician and outspoken author of the weekly column, Duty to Warn for the Duluth Reader states this:

“Common iatrogenic (drug or doctor-caused) diseases can be caused by commonly prescribed drugs and/or commonly injected vaccine ingredients, which are making many of us highly drugged, malnourished, environmentally-toxic and also thoroughly vaccinated.” (Source)

How Vaccines Contribute to Mitochondrial Dysfunction

Let’s review a few of the ingredients in vaccines and their connections to mitochondrial dysfunction and even cancer.

Additives to boost a vaccine’s purported “efficacy” are called adjuvants,  Both adjuvants and preservatives in vaccines are known to be highly toxic when injected into humans. These toxins are injected into babies whose immune systems are not fully developed. These toxins directly corrupt the DNA of mitochondria.

See our course on adjuvants, available only at VaccineU.com

Formaldehyde, an embalming fluid used to preserve dead bodies for viewing in funeral homes, is another additive used in many vaccines. Its presence is meant to minimize bacterial infections held by corrupted antigens. But it is a known carcinogen.

Thimerosal is the most publicized toxic preservative. The compound consists of 49.6 percent ethyl mercury by weight. Mercury is second only to plutonium in terms of toxicity as a metal. It is a serious neurotoxin that binds easily with fat. Notably, the brain and the central nervous system is primarily comprised of fat.

Aluminum is used in almost all vaccines as an adjuvant for boosting an antibody response from its viral or bacterial antigen. The pharmaceutical industry measures vaccine efficacy by its antibody response. An antibody response is only a small part of an immune response. It does not guarantee protection against any infection! Natural immunity comes from human contact with the pathogens or contracting the illness – in the presence of fever – and recovering from it.

Aluminum is a known neurotoxin that easily penetrates the blood-brain barrier. A 2018 study determined infants receive 17 times more aluminum than would be allowed if doses were adjusted per body weight during the first days of their lives.

All of these toxic vaccine components have the potential to create mitochondrial disfunction that can shut down normal cellular respiration, leading to the glucose fermentation described by Dr. Warburg as the root of all cancers.

Some vaccine ingredients, such as formaldehyde, are independently carcinogenic. Even though the role of defective mitochondria in cancer development has been intensely debated for years, current science is providing direct evidence to support the theory that mitochondrial dysfunction leads to cancer as initially proposed by Warburg.

When you dig deep enough, you find that vaccine toxins disrupt cellular metabolism and could quite possibly be responsible for the surging rate of childhood cancer.

Paul Louis is an independent health journalist who understands the moniker “Medical Mafia” is more appropriate for Big Pharma and modern medicine than most realize.