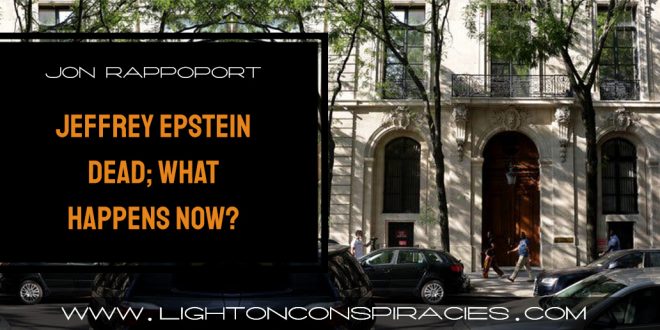 Hanged himself in his New York cell. Was on suicide watch, after earlier suicide attempt or assault. Where were the guards? Who can possibly believe this story on its face?

Suicide Watch means the prisoner has no materials in his cell, like bedsheets or blankets, he can use to hang himself. It means guards are on duty around the clock. It means all this and more, in a high profile case where everybody and his brother was warning that Epstein would be murdered. And yet we’re told he killed himself.

Some prominent men (e.g., attorney Alan Dershowitz) had been accused before. Not all court docs are unsealed.

One reporter suggested that now that Epstein is dead, maybe more witnesses, no longer fearing for their lives, will step forward and offer testimony. Really? If Epstein was, in fact, murdered, this would ratchet up the fear. Not take it down.

And now there will be no trial, correct? If Epstein is dead, how can a trial against him proceed? And if that is so, then the accusations against powerful men who had sex with his girls will not be brought up and aired in court—which would be the whole point in murdering Epstein, assuming that is what happened.

If charges are going to be brought against Epstein’s female assistants, these would be separate legal actions that would have to start from scratch. In such actions, more documents could emerge, but women and girls who are put on trial for enabling Epstein’s operation could certainly claim, as they already have, that they were coerced by Epstein and their lives were threatened if they didn’t carry out orders. Such claims, whether true or false, are not easy to refute, especially when clever lawyers are on board—to say nothing of psychiatrists who can tangle up proceedings for years.

The story of Epstein’s suicide or murder is in its first stage as I write this. It’s quite possible that new details will emerge that radically change the picture that’s being painted at the moment….

For the moment, the prominent men are protected, in the ongoing he-said she-said atmosphere…