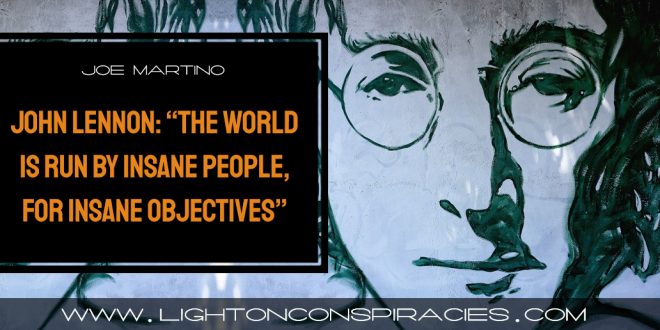 John Lennon: “The World Is Run By Insane People, For Insane Objectives”

Between the wars on terror and on drugs, recurring  economic disasters and the disappearing middle class, racial wars, Big Pharma, GMOs, and corporate lobbying, it’s clear we’re in desperate need of change, and you have to wonder how we got here in the first place.

It was in my later years of high school that I began to feel relief about something that had bothered me for a long time: I started to realize how the world really works. Now, at 30 years old, I’ve interviewed and worked with many of the top researchers in the field of truth seeking. These conversations have illuminated many truths about our world, but none more so than this one: Our world is run by psychopaths.

I want to be very clear here — my aim is not to judge these men and women or call them evil, nor is it to stir up strong emotions amongst my readers. This is about taking a good, hard look at what’s really going on in our world so we can actually begin the work of changing it.

“As difficult as it was for me, I’ve come to an inescapable and profoundly disturbing conclusion. I believe that an elite group of people and the corporations they run have gained control over not just our energy, food supply, education, and healthcare, but over virtually every aspect of our lives; and they do it by controlling the world of finance. Not by creating more value, but by actually controlling the source of money.”

You know it; you feel it. Something is not quite right with our world, and as each day goes by, more and more people are realizing this in a big way. In 2016 we witnessed millions begin to realize how elections are rigged and that we truly have no choice about who governs us.

We began to learn that our world leaders are closely involved with companies who fund terror and that the War on Terror is largely fabricated to justify certain actions.

Coming to understandings like this shows a shift in our overall consciousness as a planet and helps us to realize how we can move forward. Should we keep voting expecting to see change when that’s not how our world actually works? Should we spend money supporting companies who are harming us and our environment? Should we support the medical system blindly rather than working to create better health and wellness so we experience fewer illnesses overall?

The more we understand how the game works, the more we can determine how to change it. Think of it this way: Imagine you are playing a game and you find out someone is cheating, rigging the rules so you always lose. You might get up, walk away, and refuse to keep playing. Since that person can’t play alone, they’re forced to stop altogether. In a sense, this is exactly what we need to work towards.

A transformation in consciousness comes from understanding, which leads to taking new actions, which helps to create a different world and bring solutions. But it starts with knowledge and consciousness.

John Lennon’s name is synonymous with peace and political activism. He was always a bit of a rebel, even early in life, and helped millions to think differently about their world. His song “Give Peace a Chance” became an anthem for the anti-war movement and is still heard today during peace marches around the world.

Best known for his time with The Beatles, John has always had strong views about politics and today might be equally as known for his activism and wisdom.

Imagine all the people living life in peace. You may say I’m a dreamer, but I’m not the only one. I hope someday you’ll join us, and the world will be as one.

My role in society, or any artist’s or poet’s role, is to try and express what we all feel. Not to tell people how to feel. Not as a preacher, not as a leader, but as a reflection of us all.

Lennon had a deep sense of wisdom about him, and even to this day, his words have the power to affect millions.

On June 6, 1968, Peter Lewis chatted with Lennon and Spinetti about a new play they were working on. The filmed interview would air on BBC-2 as part of the arts program Release. This is a clip from that interview.