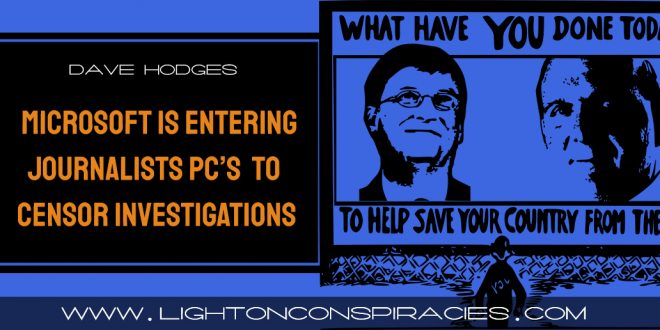 As the Independent Media focuses on the Left’s extreme censorship on social media sites, there is a new brand of censorship that is appearing which threatens to cut the legs off of all Independent Media investigations. The Common Sense Show may be the first to report this phenomenon, but very soon, I expect the following to become an everyday occurance.

Microsoft Is Entering the Computers of Journalists and Blocking Legitimate Investigations

As if the social media censorship of the Independent Media was not bad enough, now I am experiencing extreme interference from Microsoft with regard to the work of The Common Sense Show.  Marilyn Rupar and Alexandra Daley are both valued contributors to our investigative efforts of The Common Sense Show and their work is being censored and stolen by Microsoft.

Marilyn Rupar is someone that I met at last year’s Branson, MO. conference on Transhumanism as she stood in a long line in order to introduce herself to me and I am glad that she did. Marilyn has done some fantastic work for The Common Sense Sense Show particularly on the topic of the Sinoloa drug cartel, at the behest of the Chinese government, which is controlling and taking over the politics and law enforcement activities in Humboldt County, CA., as the Sinoloa drug cartel is engaged in every type of perverted crime known to mankind. Marilyn has also been at the forefront of exposing the diploma mill operations at universities like Texas A & M and Case Western Reserve as they inappropriately rush through illegal aliens and their illegitimate obtaining of advanced college degrees in “rapidly accelerated” academic programs, often at taxpayers expense.

Am wondering if the banning event is just on this laptop (that I do all of my research on) and that my Microsoft office account is being censored /tracked in this way? Am curious to know if others might be experiencing this – – Will keep you posted to see if this continues.

ANOTHER TRACKING EVENT ON MY LAPTOP.

On Saturday, May 4th,  opened a word doc to paste an article for my research library …but…Microsoft threw 2 screens up in front of me that I had to agree to being tracked in order to continue.

I didn’t want to agree and tried to close the screen – – it was frozen and would not let me close out. I had to agree to be tracked by Microsoft in order to continue -I went into Task Manger to close these two screens – – that were stuck on my screen

These are the two notices. I tried to take a screen shot, but Microsoft froze my screen shot button

So I installed an another software program called Kingsoft to take these 2 screen shots.

Kingsoft is a free alternate to Microsoft – its a Chinese program and about 95% identical to Microsoft / no doubt it has tracking also Kingsoft (if you’d like to check it out to download).

Marilyn has successfully closed the loop which demonstrates that Bill Gates (ie Microsoft) is engaged in Facebook behavior. However, as Marilyn would soon discover, Gates’ transgressions against his customer base gets a whole lot worse!

Marilyn subsequently sent the following disturbing communication on May 6th:

I’ve been organizing my research files over the past 2 days and now, specific words I have previously given my word doc titles are being banned  / censored –

A pop-up saying the file name was too long kept appearing when I tried to move each doc to a folder.

I was only able to move each Word doc into a folder after I deleted specific words and renamed them into abbreviated /code words.

I’m wondering if this is just happening to the files on my computer that are being surveilled  – or if anyone else is noticing this event.
Marilyn

Marilyn’s question about whether anyone else is noticing this kind of extreme form of censorship and interference with her investigations into the criminal global elite is unique to her. It is not unique to Marilyn. Another valued contributor to The Common Sense Show, Alexandra Daley, just experienced another form of interference. Two of her files simply disappeared as evidenced by the following message.

On Wednesday, May 8th, 2019, Alexandra sent me the following text message”

I still can’t find the Odebrect-Peru doc of the weather/food I sent you. They have just seemed to have vanished. Just want to know if you got them? (Editor’s Note: I did receive the file).

Two primary contributors to The Common Sense Show have experienced extreme interference with their work in which Microsoft is entering the computers of journalists and attempting to interfere and block the dissemination of the information that they have discovered.

What America fails to realize is that the Google-based Social Credit System is already here. As previously covered on the CSS, Bank of America, Pay Pal and Mastercard have all refused or cancelled services to conservatives without cause or explanation. Now, Microsoft is entering journalists computers and interfering with their work. Meanwhile, our President is doing nothing about these illegal actions. Everyone reading these words needs to reach out to President Trump and demand he use the laws at his disposal and put an end to these abuses.