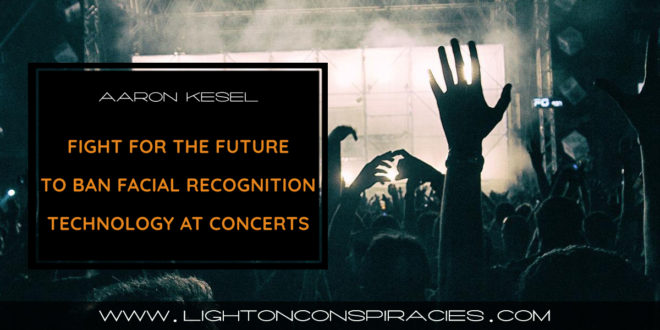 Several musicians and festivals are coming together to call to an end to concert promoters using facial recognition at venues and music festivals, Vice News reported.

Last year Live Nation announced it would begin deploying facial recognition at its concerts. The event organizer stated they would start having customers walk past facial recognition cameras instead of presenting their tickets, a horrifying first step for indoctrinating the public towards using the technology.

This has spurred Tom Morello of Rage Against The Machine, Glitch Mob’s Speedy Ortiz, and a growing number of dozens of other artists and festivals to team up with digital rights activist group, Fight For the Future, in a campaign.

The campaign aims to call out Ticketmaster and its parent company, Live Nation, as well as other venues for using facial recognition on concert goers.

The group of artists cite “dangers to their fans in the form of police harassment including — misidentification, deportation, arrests for outstanding charges during an event and drug use during an event, discrimination at their concerts, and fans in a permanent government database,” all very valid concerns.

The other major concern by this writer that was left off the web page, is the technology would effectively turn every single person into a product, by venues and partner brands knowing what type of music each person likes. This could be abused in a variety of different ways including targeted advertising of groups of fans who like a certain genre of music, as well as email spam of up and coming concerts that a “fan” might like to see and hear.

I don’t want Big Brother at my shows targeting fans for harassment, deportation, or arrest. That’s why I’m joining this campaign calling on @Ticketmaster and others not to use #facialrecognition at festivals and concerts. https://t.co/i3a9oPIa5C

people should feel safe & respected at shows, not subject to surveillance, harassment, deportation, or arrest. please join me and @fightfortheftr to tell @Ticketmaster & others not to use #facialrecognition at festivals and concerts https://t.co/vdIKF2hbKo #DontTrackFansAtShows

Everyone is welcome at Meltdown, so we're standing up for ALL Melters. Join us and @fightfortheftr to tell @Ticketmaster & others not to use #FacialRecognition at festivals and concerts https://t.co/cUVLVi164Z #DontTrackFansAtShows https://t.co/YmwnRb4PWF

Everyone is welcome at Meltdown, so we're standing up for ALL Melters. Join us and @fightfortheftr to tell @Ticketmaster & others not to use #FacialRecognition at festivals and concerts https://t.co/cUVLVi164Z #DontTrackFansAtShows https://t.co/YmwnRb4PWF

Music fans should feel safe and respected at festivals and shows, not subjected to invasive biometric surveillance. Today we're launching a new campaign mobilizing artists, fans, and promoters to oppose the use of #facialrecognition at live music events. https://t.co/5g6X59zf4K pic.twitter.com/CPmjSAQUrS

This is so scary- @Ticketmaster
& others are using facial recognition at festivals and shows. #DontTrackFansAtShows https://t.co/CrvVetMAiJ

Lately, BIG brother has been pushing the use of surveillance technology, from Amazon helping law enforcement with its Facial Rekogntion software, DHS wanting to use it for border control, to the Olympics wanting to use the tech for security.

Even retail is pushing for the technology as an anti-theft mechanism to be introduced in a thousands of stores using biometric facial recognition software FaceFirst to build a database of shoplifters, as Activist Post reported.

Some of the biggest airports in the country — estimated at 16 airports across the U.S. — are now scanning us as we board international flights. While CBP (Customs And Border Patrol) expects to scale up the program to cover more than 97 percent of passengers flying outside of the U.S. by 2021 according to NextGov.

Its all a part of U.S. President Donald Trump’s “Biometric exit” agenda, which was originally signed into law under the Obama administration, BuzzFeed News reported.

The NYPD adopted facial recognition technology eight years ago and dozens of other police departments have followed suit.

The campaign website against using the technology at concerts reads:

Ticketmaster — owned by the same company as Bonnaroo, Austin City Limits, Electric Daisy Carnival, Electric Forest, and more — is investing in facial recognition technology, which puts undocumented fans, fans of color, trans fans, and fans with criminal records at risk of being unjustly detained, harassed, or judged. 24/7 mass surveillance will not keep concerts safe. We can stop this.

What can you do to stop this? According to the website, make some noise using social media, tweet at artists and click here for emails to top festivals/venues voicing your concerns demanding they don’t support the use of facial recognition.

Here’s the default tweet, feel free to customize it a bit and make it unique while standing up for your rights with the hashtag: #BanFacialRecognition.

Hey @ (TAG SOMEONE HERE) – are you going to let the government spy on and deport your fans? Privacy matters to me, please take a stand and #BanFacialRecognition at your shows.

Many likely laughed about the paranoid nature this writer has expressed when it comes to facial recognition technology; however, vindication came swiftly recently when Amazon announced it wanted to create a “Crime News Network” to monitor neighborhoods with its Ring doorbell facial recognition cameras. At this point, they are literally just creating George Orwell’s 1984 or reinventing the Stasi.

The fight against facial recognition is just beginning, and this writer has been one of many attempting to champion that effort for years now. Don’t believe that we have already lost the battle, just because more and more facial recognition companies have been popping up. Doesn’t mean that we can’t stop the attempted nightmarish era of mass surveillance by the state and private companies.

Already, we have had several wins in this long fight and there are signs of hope. First, San Francisco banned facial recognition technology being used by the government in May of this year, then Somerville, Massachusetts, and Oakland, California followed suit.

The rapid growth of this technology has triggered a much-needed debate to slow down the roll out. Activists, politicians, academics and even police forces are expressing serious concerns over the impact facial recognition could have on our society.

Several lawmakers have even chimed in to voice concerns about Amazon’s facial recognition software, expressing worry that it could be misused, The Hill reported.

The committee’s top Republican Rep. Jim Jordan (R-Ohio.) also expressed “It’s time for a time out” on government use of the surveillance technology.

Privacy advocate groups, attorneys, and even more recently Microsoft, which also markets its own facial recognition system, have all raised concerns over the technology, pointing to issues of consent, racial profiling, and the potential to use images gathered through facial recognition cameras as evidence of criminal guilt by law enforcement.

If you need even more hope, recently Florida cancelled its trial of Amazon’s Facial Rekognition after unsuccessful results combining a total of 15 months of technical issues with — accuracy, bandwidth issues and controversy over the face-scanning technology.

The FBI has also failed to assuage concerns of the Government Accountability Office (GAO) on its own use of facial recognition technology using the Next Generation Identification-Interstate Photo System.

A national survey of 3,151 U.S. adults in December, found only one in four Americans believe the federal government should strictly limit the use of facial recognition biometrics technology.

The survey also indicates Americans are more likely to support a trade-off to their own privacy caused by biometric technology if it benefits law enforcement, reduces shoplifting or speeds up airport security lines.

Only 18 percent of those polled stated they agreed with strict limitations on facial recognition tech if it comes at the expense of public safety, compared to 55 percent who disagreed with such limitations.

However, a poll from the Brookings Institution in September 2018 contradicts that and found half of Americans favored limitations of the use of facial recognition by law enforcement, while 42 percent felt it invaded personal privacy rights.

Fight For The Future has previously launched a first-of-its-kind interactive map that tracks where in the U.S. facial recognition technology is being used and where it is being resisted, along with a tool-kit for local activists who want to help kickstart a ban in their city or state, as Activist Post reported.


Consent to be identified by the government whenever and wherever we go is approval to have the government decide whether, when, and where we are allowed to travel like China. Put bluntly:  it is very dangerous.

If we consent, we normalize this type of technology and we are telling the military-industrial complex and police state that it’s okay to force this tech down our throats and take more of our rights. If we confront them, like in San Francisco, Somerville, Massachusetts, and Oakland, California. We show that we care about our rights and won’t have our rights taken away without putting up a fight.

More recently, the Privacy and Civil Liberties Oversight Board has signaled it will investigate NSA surveillance and use of Facial Recognition.

As Fight For The Future says, “together we can stop this!” And if all else fails we can all buy this anti-facial recognition jewelry or learn to disrupt the technology with lasers as Hong Kong protesters have done.

Share
Previous Doug Casey on Bitcoin, Part II
Next The 9/11 Solution – How the myth was sold