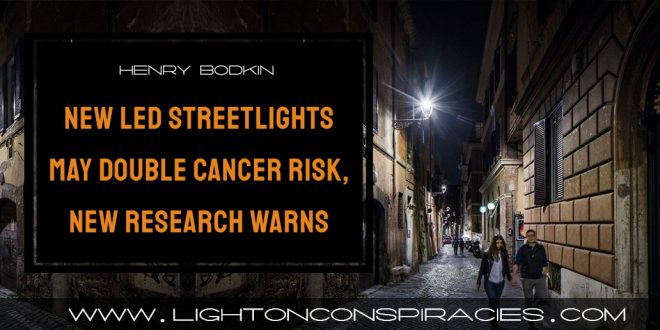 Britain’s new generation of street lights risk dramatically increasing rates of breast and prostate cancer, according to a new study.

Scientists have warned officials to consider limiting the roll-out of LED (light-emitting diode) lights after an investigation indicated a “strong link” between the technology and the disease.

Hundreds of thousands of street lights have so far been switched to LED, which are cheaper to run and result in lower emissions, while approximately 30 per cent of the the lights on motorways and A roads in England have also been upgraded.

However, analysis of more than 4,000 people living in 11 separate regions of Spain established a link between heavy exposure to the LED lighting and a doubling of the risk of prostate cancer, as well as a 1.5-times higher chance of breast cancer.

The nature of the study means researchers cannot prove a causal link, but they believe the “blue light” emitted by the LEDs may be disrupting the body’s circadian rhythm, which in turn affects hormone levels.

Both breast and prostate cancers are hormone-related.

The research team at the University of Exeter and the Barcelona Institute for Global Health said their findings may also implicate the nighttime use of mobile phones and tablets, which also emit blue light, in cancer development.

Dr Alejandro Sánchez de Miguel, from Exeter, said: “Humans have evolved to need light during the day and darkness at night.

“As towns and cities replace older lighting, we’re all exposed to higher levels of  “blue” lights, which can disrupt our biological clocks.”

“It’s imperative that we know for sure whether this increases our risk of cancer.

“Scientists have long suspected this may be the case – now our innovative findings indicate a strong link.”

Blue light is a range of the visible light spectrum emitted by most white LEDs and many tablet, phone and TV screens.

It has one of the shortest, highest-energy wavelengths and previous research has indicated that exposure to blue-spectrum light decreases the production and secretion of the melatonin hormone.

Melatonin plays a key role in regulating the day-night cycles and has several other key functions – for example it is a powerful anti-oxidant and has also an anti-inflammatory function.

There is no national policy to switch to LED streetlights, however dozens of councils across the country have or are planning to switch away from the traditional “orange” spectrum lights.

Public Health England also raised concerns about the increasing use of LED lights on new cars, suggesting they can dazzle oncoming drivers, in particular the elderly.

The new study, which is published in the journal Environmental Health Perspectives, was undertaken by matching epidemiological data with night-time images of taken by astronauts aboard the International Space Station.

He added: There is evidence pointing to an association between exposure to artificial light at night, disruption of the circadian rhythm, and breast and prostate cancers.”

The American Medical Association has already called on US cities to use the lowest-intensity LEDs where possible, as well as shading them to reduce glare.

Approximately one in eight men in the UK receive a diagnosis of prostate cancer during their life, with women facing the same lifetime risk of developing breast cancer.