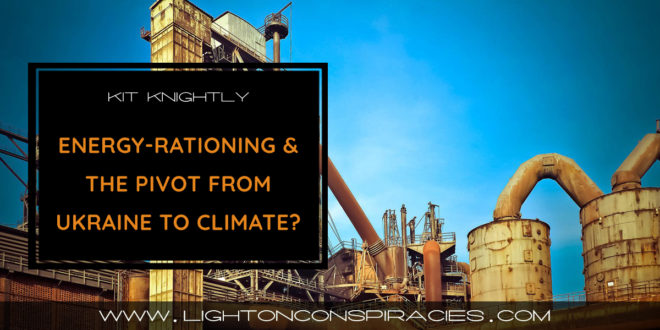 “Operation Thermostat” — Energy-Rationing & The Pivot From Ukraine To Climate?

Italy is officially becoming the first country to start rationing energy after cutting their supply of Russian gas and oil.

From next month, until at least March 2023, public buildings across the nation will be banned from running air conditioning at lower than 25 degrees, or heating higher than 19 degrees.

The plan, termed “Operation Thermostat” in the press, is being sold as a way for ordinary people to show “solidarity” with the people of Ukraine, with Italian Prime Minister Mario Draghi saying:

I’m not exactly sure how adjusting your thermostat is going to achieve ‘peace’, but hey we’re living in the age of sentimental manipulation over reason, so – just believe.

For example, the Guardian is illustrating the story with pro-peace artwork allegedly done by Italian schoolchildren (in English, for some reason).

There’s no talk yet of this kind of energy-rationing rule extending to private businesses or homes, but a marker has been set down. Expect other nations to follow suit.

After that of course will come the opinion pieces asking questions like “we rationed gas to fight Putin, why not climate change?”, and headlines saying that “Europe-wide gas rationing was good for the planet” or something similar.

Honestly, when I originally wrote the above paragraph I had no idea the New Yorker had published this opinion piece for Earth Day, headlined:

“This Earth Day, We Could Be Helping the Environment—and Ukraine”

It argues that rationing energy to fight Putin is just like digging for victory to fight Hitler, and – just as I predicted – would also be good for the planet:

During the Second World War, victory demanded more oil […] In the wars dominating the globe today — Putin’s land grab in Ukraine, and the global land grab caused by rising sea levels and spreading deserts — victory demands getting off fossil fuels as fast as we possibly can.

It even hints at a quasi-lockdown – this time for the sake of beating Putin and combating climate change:

Everyone who can work from home could continue to do so, at least on, say, Mondays, knocking a day off the national commute. Carpools could be organized, taking special advantage of the fact that there are now two million electric cars on the road. More bike paths could be made available, and, when air-conditioning season begins, Americans could turn their thermostats up a degree.

Remember lockdowns were marketed as planet-saving almost from the moment they were put in place, despite it making almost zero sense. The agenda was pretty obvious right from the start.

It’s interesting that “operation thermostat” should be announced on April 22nd – Earth Day – despite having zero to do with climate change. It’s also noteworthy that climate protest groups have piggy-backed on the idea to call for an EU-wide boycott of Russia’s fossil fuels.

Share
Previous Why Are So Many Mysterious Fires Happening At Food Processing Facilities All Across The United States?
Next The Psychology of Manipulation: Lessons Learned From the Master of Propaganda