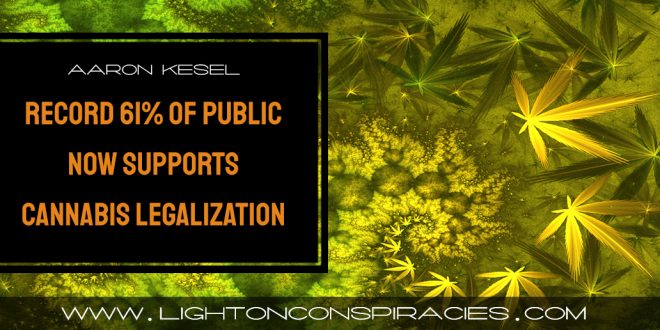 A massive 60 percent of people in the U.S. of all age groups and political affiliations now support legalizing cannabis according to a poll done by General Social Survey, Business Insider reported.

General Social Survey has tracked support for legal marijuana since 1973 and states that since then the general consensus to legalize cannabis among the population has increased.

The survey further found that legalization was most popular among young Americans — a whopping 70% say they want pot to be legal, while only 42% of Americans 65 years and older say they want the plant legalized.

However, Associated Press reports that more and more aging Americans are seeking to treat their aches and sleeplessness and other problems that come with old age. Although, they aren’t all smoking and many are choosing the opposite method of cannabis-infused snacks or drinks.

As Activist Post reported, once cannabis and CBD products were used by participants of another study to replace BIG Pharma’s drugs, users found themselves not wanting to use drugs with more than half quitting.

A whopping 90% of people in the study reported they were likely to buy plant-derived CBD products again in the future, while many reported using a variety of CBD products rather than just one.

There are an exceeding number of at least 850 brands of marijuana-derived CBD products on the market and 150 hemp-derived solutions according to the study. It’s worth noting for the reader that marijuana and hemp are the two variations of the cannabis plant. While this can get confusing, hemp CBD oil is mostly legal thanks to a bill signed recently by President Donald Trump and marijuana CBD-derived oils are still illegal.

Meanwhile, states and the FDA are both getting involved in policing the new industry, with many calling CBD oil from hemp illegal despite the lack of psychoactive effects.

To reiterate, one makes you feel good without the psychoactive effects while retaining medical properties (the hemp) and the other gets you high, (marijuana-derived CBD.)

“40 percent of hemp-derived CBD users with a medical condition find their cannabis products to be extremely effective at relieving their symptoms—compared to 37 percent of marijuana-derived CBD-only users and 41 percent of whole plant CBD users,” the Brightfield Group states.

In another study, researchers determined that there is “anti-relapse” potential of transdermal CBD. In the investigation, the researchers administered transdermal CBD to animal subjects that had a history of self-administering cocaine or alcohol and exhibited characteristics of an addict such as dependency, and anxiety.

Activist Post previously wrote that several restaurants are suddenly offering cannabidiol (CBD) infused snacks and drinks; however, according to several state regulators, selling them is illegal.

CBD oil is derived as a powerful ingredient reaped from the hemp plant. Many may find it shocking to learn that CBD is similar to a compound that our bodies produce naturally, and from birth, called endocannabinoids. Cannabinoids aren’t just found in the cannabis plant, they’re also naturally occurring in other plants in nature, they are just found at a higher potency in cannabis.

CBD and marijuana has shown promise as a treatment for conditions like epilepsy and anxiety in early research. Although more research is needed into CBD oil and marijuana and its effects, much of the studies have been positive. So much so that there are now colleges adding cannabis to their curriculum, teaching on both the hemp and cannabis industries as Activist Post reported.

Surprisingly, the main regulator, the FDA, has seemed to signal a lighter tone on regulating the cannabinoid industry federally.

In fact, Commissioner Scott Gottlieb even stated that the agency is looking for “pathways” to legalize the sale of CBD oil and other cannabis-derived compounds in food, beverages, and supplements.

Marijuana is now legal for medical purposes in 33 states and as a recreational drug in 10 out of the 50 states. Meanwhile, marijuana remains illegal federally; however, the 2018 Farm bill slightly legalized the other industry hemp when President Donald Trump signed what’s being deemed “the Farm Bill of 2018” into law right before Christmas of last year on December 20th, 2018.

The Farm Bill was introduced by Senate Majority Leader Mitch McConnell who announced that he would propose the legislation alongside Senator Rand Paul to legalize hemp by removing it from the list of controlled substances, where cannabis sits alongside psilocybin mushrooms, MDMA, and heroin. The bill would also offer “full protection for individual farmers as well as the interstate commerce of U.S. grown and manufactured hemp products; normalize finance, banking, insurance, and other business proceedings for the hemp industry; advance research opportunities; ensure access to public water rights for hemp farmers; and protect the increasing and perhaps unlimited variety of hemp-derived products by promulgating a ‘whole plant’ definition of Hemp.”

It’s “an $867 billion, five-year spending bill that funds agricultural, nutrition and other federal programs — also loosened some federal restrictions on cannabis. It legalized hemp by removing it from the Controlled Substances Act while preserving the FDA’s authority to regulate the products,” CNBC reported.

The FDA currently prohibits companies from adding CBD and THC to food, drinks, and supplements. The agency also forbids manufacturers and retailers from making any therapeutic claims about their products. It also restrains the sale of food, supplements and other products containing CBD across state lines at its current state of laws.

With the Farm Bill of 2018 passed and signed by U.S. President Trump, the legislation effectively removes industrial hemp from Schedule I of the Controlled Substances Act. While it federally legalizes the commercial cultivation of the crop, what wasn’t touched was CBD oil-based products.

The U.S. Food and Drug Administration (FDA) approved its very first cannabis-derived drug in June of last year, Epidiolex a (cannabidiol) [CBD] oral solution for the treatment of seizures associated with two rare and severe forms of epilepsy, according to the regulator’s website.

On top of everything happening in the cannabis industry, we can now add general support among all age groups within the U.S. for legalization. An issue that is sure to be a key campaign point in the coming 2020 election with politicians like Elizabeth Warren pushing to protect the pot industry and President Donald Trump who has said states should have the right to legalize pot if they want, whose administration seems to be looking to pioneer legalization.