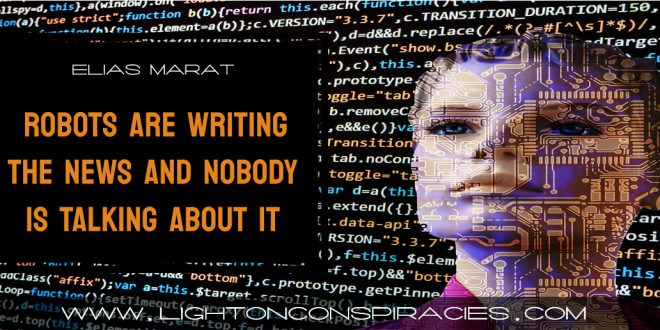 Robots Are Writing the News and Nobody’s Talking About It As journalists face increased layoffs despite the growing appetite for up-to-the-minute, timely news, a new trend has quietly been disrupting the news industry.

News organizations are increasingly turning toward artificial intelligence (AI) for production, using a variety of new automated systems to pump out content with minimal need for direct human input.

According to a report by The New York Times, Bloomberg News relies on a system called Cyborg to produce about a third of its articles.

Most of Cyborg’s output takes the form of company earnings reports that are rife with percentages, charts, and other financial data that can be crunched down into a news story quickly and accurately.

But Bloomberg isn’t alone. Increasingly, major news agency like Reuters and Associated Press, along with a number of newspapers such as Washington Post and Los Angeles Times, are using algorithms to crunch out news on everything from local minor league sports games to earthquakes.

Even Patch, which publishes local news nationwide, relies on AI to draft anywhere between 5 to ten percent of its stories for the 800 communities that it serves.

Last year, the Washington Post took first place in the category of “Excellence in Use of Bots” at the Global BIGGIES Awards for its use of Heliograf, a robot reporter that was used in the Post’s coverage of the 2016 Olympic Summer Games and that year’s election. The judges hailed Heliograf’s work for the Post, noting that its “set of examples and explanations are eloquently written and backed. The results also seem quite promising. Very impressive.”

Indeed, for many journalists, reporting the banal details of sports games or financial reports is a tiresome, monotonous task that takes up bandwidth and spares little room to flex talent like they would on more in-depth, analytical writing.

The work of journalism is creative, it’s about curiosity, it’s about storytelling, it’s about digging and holding governments accountable, it’s critical thinking, it’s judgment — and that is where we want our journalists spending their energy.

Nick Evershed, a data and interactives editor for The Guardian Australia who created the company’s own system called ReporterMate, offered similar reasoning, explaining:

Journalists would prefer to be spending time on deeper, more meaningful investigations, such as why the climate is changing, and how does it affect people? Or which politicians are abusing the expenses system?

The use of AI has long been a part of the reporter’s toolkit in terms of speeding up production, whether it comes in the form of AP Stylebook compliance software, spellchecking and grammar apps, or even transcription and translation software.

But many fear the danger that increased automation can pose not only to quality journalism and human journalists, but to job markets in general.

A study from the University of Oxford found that 47 percent of U.S. jobs are at risk of falling prey to technological unemployment due to the rapidly-developing automation of various vocations, especially those jobs “mainly consisting of tasks following well-defined procedures that can easily be performed by sophisticated algorithms.”