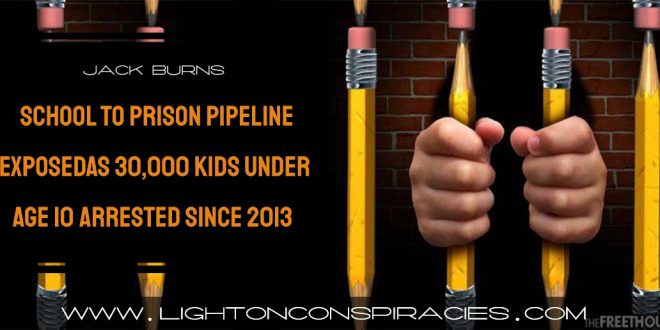 Arrests of children have skyrocketed over the last decade according to the latest statistics published by the FBI. Gone are the days of sending children to the principal’s office for a paddling. Now children as young as 6 are getting arrested in Police State USA.

In the past, students and children were disciplined with consequences such as timeout and paddling. As more and more schools replace handling things internally with external police state options like school resource officers, children are ending up with arrest records and their fingerprints stored in databases.

Often referred to as the “school to prison pipeline”, the principal players in the funneling of kids from school to jail are the school resource officers (SROs), and it’s got parents at their wits end.

Fortunately, the number of students arrested year to year are on the decline from 2014 until now. ABC News writes:

While the FBI’s latest crime report released on Monday shows the numbers of children arrested under the age of 10 have continue to gradually declining in the past five years from a high in 2014 of 6,458 to 3,501 in 2018, experts say it is still too many.

What may seem like routine policing or modern-day policing methods to some, others see as a human rights violation, a slippery slope leading to a criminal life, and a poor use of school resources. Standing in the gap for children, some would say, are advocates of Restorative Justice (RJ). For example, instead of calling a school resource officer when a fight breaks out on campus at a K-12 facility, security officers (often teachers) will bring the kids and teens into a community of concerned advocates for keeping kids out of the school to prison pipeline.

According to the Institute for Policy Studies, RJ programs are accepted by advocacy groups and others who are highly critical of the presence of school resource officers on campuses. The institute writes:

Restorative justice (or RJ) treats incidents in which people are harmed (like, say, school fights) as requiring healing rather than punishment. It focuses on the actual harm that occurred and the need for healing, rather than on the breaking of a rule.

Instead of calling gun-toting badge-wearing members of society to deal with unruly children, the RJ team is called.

When an incident arises, the parties come together for a restorative circle that includes students, staff, community members, and a restorative justice practitioner. They address the harms together and try to arrive at a solution.

RJ programs are catching on in schools where discipline issues have historically been a major problem.

A growing number of school districts nationwide, from Oakland, California to Washington, D.C., are implementing these practices.

The results are promising with referrals for school discipline down across campuses, students no longer have to fear going to jail. But such a lack of fear has reportedly caused even more disruptions in the classroom. We spoke with several teachers who wish to remain anonymous who say the RJ programs have created a “lack of consequences” on campuses with students now getting away with incredibly disruptive, disrespectful behavior.

So, therein lies the delicate seesaw balancing act at work. Do schools involve SROs to deal with behavior issues (often linked to emotional issues) or do they work as a community to ensure arrests in school never take place?

According to a recent research study evaluating the outcomes of Restorative Justice, it is working. The authors write:

The bottom line for restorative justice programs and practices is that the evidence is promising, suggesting possible but still uncertain benefits for the youth participants in terms of reduced future delinquent behavior and other non-delinquent outcomes. Victim participants in these programs, however, do appear to experience a number of benefits and are more satisfied with these programs than traditional approaches to juvenile justice.

While additional research needs to be done to evaluate whether or not the RJ approach to disciplining children is the best way to go, almost everyone should be able to agree on one thing: police have no business placing 6-year-olds in handcuffs.

Jack Burns is an educator, journalist, investigative reporter, and advocate of natural medicine.

This article was sourced from The Free Thought Project.