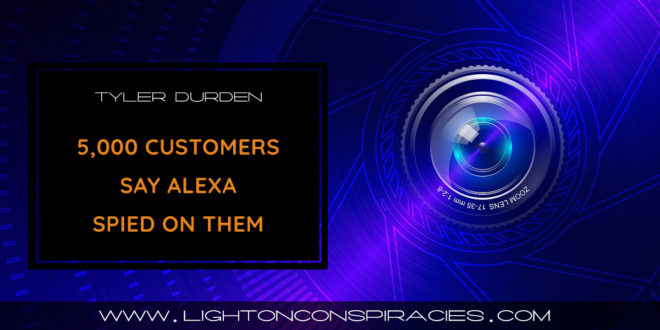 “So Sue Us”: Amazon Responds To 75,000 Customers Who Say Alexa Spied On Them After receiving more than 75,000 individual complaints that its Alex-powered Echo devices were spying on them, Amazon has abandoned its policy that such complaints must be resolved outside the court system via secretive arbitration proceedings, and will instead allow customers to file lawsuits, according to the Wall Street Journal.

The company quietly changed its terms of service to file lawsuits, as the company already faces at least three class action suits – including one brought May 18 alleging that the company’s Echo devices were recording people without permission.

The retail giant made the change after plaintiffs’ lawyers flooded Amazon with more than 75,000 individual arbitration demands on behalf of Echo users. That move triggered a bill for tens of millions of dollars in filing fees, according to lawyers involved, payable by Amazon under its own policies.

Amazon’s decision to drop its arbitration requirement is the starkest example yet of how companies are responding to plaintiffs’ lawyers pushing the arbitration system to its limits. -WSJ

Arbitration agreements are typically buried in the fine print in order to avoid costly litigation, while many employers use them for adjudicating issues such as discrimination complaints or pay disputes. The right to require arbitration has been repeatedly upheld by the US Supreme Court.

During private arbitration, less evidence is presented and there are no appeals – with companies typically agreeing to pay for initial filing fees ranging between $100 and $2,000. The proceedings are managed by companies that charge additional fee, while the arbitrators themselves will of course bill for their time.

According to consumer advocates and plaintiffs’ lawyers, arbitration usually makes it financially worthwhile for individuals to pursue claims, while companies say it’s a fair process.

“Companies thought they were getting out of liability altogether,” with arbitration clauses, says Chicago lawyer Travis Lenkner, whose firm filed the majority of the Amazon claims. “Now they’re seeing exactly what they bargained for, and they don’t like it.”

The mass-arbitration filings have forced companies to scramble. Uber Technologies Inc., Lyft Inc., and TurboTax maker Intuit Inc. have all tried to avoid paying filing fees or direct claims back into court after being hit in recent years with thousands of arbitration claims.

Instead, some are requiring employees to speak to a lawyer at the company before filing an arbitration claim. One arbitration provider created a mass-claim protocol that calls for handling a few test cases before the full filing fees come due. -WSJ

Claims against Amazon began pouring in after it was revealed in 2019 that Alexa devices were storing recordings of users without their consent. When consumers filed for class action lawsuits claiming that the recordings violated consent laws, Amazon was able to successfully argue that the claims belonged in arbitration. In early 2020, Keller Lenkner and other firms filed tens of thousands of individual arbitration demands.

One year later, Amazon’s attorneys notified plaintiffs’ attorneys of their recent change in terms of service – eliminating a 350-word arbitration requirement and replacing it with two sentences which say disputes can be brought in state or federal court near Amazon’s Washington state headquarters.