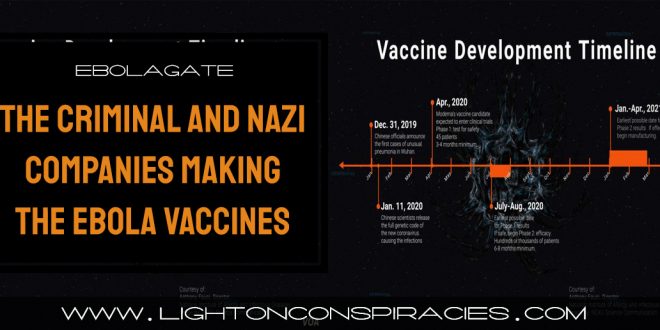 The Criminal and Nazi Companies Making the Ebola Vaccines

The WHO has okayed companies, universities, agencies with criminal backgrounds and/or with CIA involvement and/or those with a history of weaponizing of vaccines and/or with literal Nazi backgrounds to make the ebola vaccines.

Under the WHO’s own regulations, the declaration of a(n unproven) pandemic emergency permits MANDATING OF experimental, untested and potentially lethal drugs to populations  https://birdflu666.wordpress.com/2014/10/28/has-one-of-the-zombie-apocalypse-drug-been-found/

The WHO, it should be noted, caused AIDS on purpose with smallpox vaccines containing an immune virus that kills T-Cells – the AIDS virus.
http://exopolitics.blogs.com/ebolagate/2014/11/1987-who-admits-smallpox-vaccine-caused-aids-who-omits-that-it-requested-it.html
The following criminal and/or fascist groups are creating ebola vaccines.

1.  fined $3 billion in the largest fraud case in the US
http://money.cnn.com/2012/07/02/news/companies/GlaxoSmithKline-settlement/index.ht
2.  just caught dumping live polio virus into rivers in Belgium
http://www.prisonplanet.com/danger-glaxosmithkline-dumps-45-litres-of-polio-virus-into-river.html3.  facing corruption investigations now in Syria, China http://investorplace.com/2014/07/glaxosmithkline-gsk-corruption/#.VDpMp-f2KhQ  and in the UAE http://www.cnbc.com/id/102068835.
b.  Tulane University

2.  released, with USAMRIID, an ebola/lassa hybrid in Sierra Leone
https://birdflu666.wordpress.com/2014/09/15/us-department-of-defence-usamriid-tulane-university-released-bioengineered-airborne-ebolalassa-hybrid-in-sierra-leone/
3.  Sierra Leone ordered Tulane to stop using ebola tests because they are fake or false and shut down the combined hospital/US bioweapons lab where Tulane was working.   https://birdflu666.wordpress.com/2014/07/24/sierra-leone-orders-us-bioweapons-lab-at-centre-of-ebola-outbreak-to-be-relocated-tulane-university-to-stop-ebola-testing/
c.  USAMRIID

1.  weaponized anthrax and perpetrated a bioterror attack on on the US right after 9/11.

1.  IDT shows clearly how “former” Nazi bioweapons research is now connected directly to the current WHO

2.  is partnering with NIH


a.  which holds patents on ebola vaccines  http://www.thecommonsenseshow.com/2014/09/17/the-cdc-nih-bill-gates-own-the-patents-on-existing-ebola-related-vaccines-mandatory-vaccinations-are-near/

b.  which put out a false and very dangerous recommendation for melatonin as a “cure” for ebola  http://exopolitics.blogs.com/ebolagate/2014/10/melatonin-schmelatonin-the-criminal-nih-sets-us-public-up-for-ebola-like-symptoms-and-zombie-like-behavior.html


c.  which has been aggressively stopping successful alternative cancer cures for decades  http://www.burzynskimovie.com/index.php?option=com_content&view=article&id=110#.VHYgqYdSKhQ

3.  Riems island housed a Nazi biological warfare research institute, the “Reichsforschungsanstalt Insel Riems”, which was under the direct command of SS leader and eugenicist Heinrich Himmler.

4.  after the war, Riems island became a top secret East German Communist research facility. In 2010, the German government invested about 300 million euros to make it one of the most advanced bioweapons research facilities in the world with 89 labs.

5.  the twenty hectare island contains some of the biggest and most advanced bioweapons research facilities in the world. Research is conducted on Ebola, the bird flu and other virulent diseases in biosecurity level 4 facilities by the Friedrich-Loeffler-Institut, Federal Research Institute for Animal Health and partners such as IDT.

6.  One of the WHO Collaborating Centre for Rabies Surveillance & Research is also located on the island.
http://apps.who.int/whocc/Detail.aspx?cc_ref=DEU-52&cc_code=deu

7.  IDT has created a combined rabies and ebola vaccine with NIAID and Thomas Jefferson University

8.  vaccines now licensed to Exxell BIO of St Paul, Minnesota, which appears to be a shell or front company

9.  IDT Biologika has its origin in the Bacteriological Institute under the Nazi regime’s control during the second world war and producing  tetanus and diphtheria vaccines. One of its heads Ludwig Wolters testified in the Nuremberg Doctor’s Trial on Typhus jabs.

1.  which partners with criminal GSK on an ebola vaccine

2. which is headed by Anthony Fauci

a.  “the single person in charge of HIV/AIDS research since the onset of the epidemic.”  We know from the WHO own admission that AIDS was caused by the smallpox vaccine and by Merck’s vaccine head’s admission, that Marck brought AIDS to the US via the hepatitis B vaccine.  [Did Fauci inform anyone?]

b.  “under Fauci’s tutelage, fraud in research not only prospered, but has become institutionalized (thanks, in no small part, to Fauci’s role in disbanding ethics [oversite]).”

c.  “at the National Institutes of Health, …. the rigors of scientific discipline have been substituted with the quick fixes of Junk Science schemes, bribes for bureaucrats and a proliferation of lucrative treatment hoaxes.”
http://www.bio.net/bionet/mm/immuno/1999-October/014859.html

a. commits fraud and offers bribes
http://articles.latimes.com/2011/mar/19/business/la-fi-drug-kickbacks-20110319
b.  causes disabilities and a new disease

2.  Merck & Co. Inc.
a.   own lead vaccine scientist admitted they *caused AIDSin the US
https://www.youtube.com/watch?v=D29uroQRleI
b.  killing large numbers of young girls with their Gardasil vaccine
http://naturalsociety.com/uncovered-fda-documents-reveal-26-gardail-deaths/c.  have a hit list of doctors who attempt to expose their dangerous drugs and vaccines.
http://www.naturalnews.com/027116_Merck_doctors_vaccines.html ]
3.  Takeda Pharmaceutical Company
a.  causes bladder cancer
http://injurylawyer-news.com/2014/07/takeda-seeks-new-trial-9b-actos-lawsuit-verdict/
b.  causes heart failure
http://www.drugwatch.com/2012/03/11/takeda-hid-actos-heart-failure-risk/]

a.  expertise in how to enhance biothreats

b.  expertise in how to cause new diseases
http://www.jpeocbd.osd.mil/packs/Default.aspx?pg=190

1.  caused US military injuries, their children’s birth defects, and death with its Agent Orange in Vietnam,http://www.corpwatch.org/article.php?id=11638and

6.  other undisclosed pharmaceutical and biotechnology companies.

Share
Previous The Story of Otis T. Carr – The Man Who Supposedly Invented An ‘Anti-Gravity’ Vehicle In The 1950s
Next This Revolutionary Blast Furnace Vaporizes Trash and Turns It into Clean Energy (Without Any Emissions)