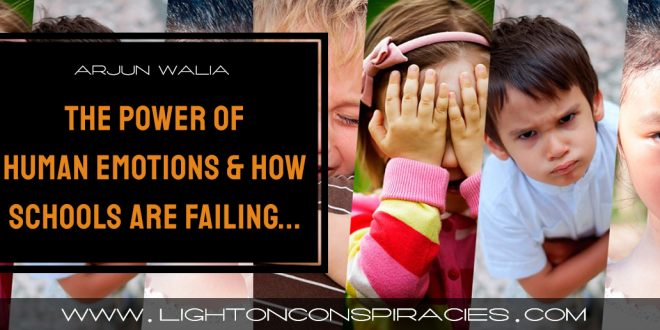 What exactly is education? Today, many view it as an opportunity to learn, thrive, and excel in the world. Others see it as a necessary step toward obtaining a piece of paper that ensures one’s entrance into the professional world. Regardless of your take on it, however, one thing is certain: From a very early age we are forced into a system that demands our presence and attention for hours a day and for years of our life. Each child is required to learn an accepted version of reality in order to fit into the specific mould desired by the elite. Just like television, a large part of school is simply programming, and we don’t really learn much about the world — or ourselves.

Perhaps this is why Mark Twain said, “I have never let me education interfere with my intelligence,” or why Einstein told the world to “never confuse education with intelligence,” and that “education is what remains after one has forgotten one has learned in school.”

School these days seems less about learning and more about rote memorization. Are we critically thinking enough, or questioning enough? Or are we simply being bred to become robots, all of us entering into the same human experience, “educating” ourselves in order to further perpetuate a broken system? We learn concepts and ideas that fit within the current paradigm and structure of society, but not about how to care for ourselves and become well-adjusted adults. Are we really being educated? Or simply groomed to become ‘good’ consumers?

Another problem with the current education model, as pointed out by world renowned education and creativity expert Sir Ken Robinson, is that it was designed and conceived for a different age. Today, new information and discoveries are constantly emerging in all fields, questioning what we once thought we knew, and that includes how people learn. Unfortunately, unless you have an amazing teacher who is passionate about our world and new information, children suffer in this system.

In fact, prior to the late 1800s, education was a private practice that took place in private institutions or through home schooling. That all changed in 1902 when John D. Rockefeller created the General Education Board in conjunction with Frederick T. Gates, a close friend and business and personal advisor. The General Education Board was responsible for funding the American public school system, and provided over 100 million dollars in 1902 while continuing their support beyond 1902. If we follow the money, it becomes clear the general education board was responsible for the creation of the American public school system. Does education not play a large role in manipulating the consciousness of human beings?

“Knowledge has to come from somewhere, and that can’t be a classroom.”

School is an experience primarily comprised of learning information — rarely questioning it, but rather taking it in as fact. While we learn about many subjects, very few of them have any real impact on our lives. There are absolutely no classes dealing with human emotions, for instance.

According to sociologist Thomas Scheff, a big supporter of emotional education from the University of California, many Western societies simply view emotions as an indulgence or a distraction, and less important than other things. And he’s right — we are often taught to bury our emotions so we can be more productive, and we are made to feel as though our emotions are not as relevant or important; they always seem to come secondary, if at all, especially within an educational setting. Scheff, among many others, believes that emotions provide valuable information, and yet we are taught not to listen to them. “Just as dangerous,” Scheff said, “is the practice of hiding one emotion behind another.” He has found that “men, in particular, tend to hide feelings of shame under anger, aggression and, far too often, violence.”

Many of the issues and problems that arise in our lives stem from the fact that we really have no idea how to process or address our emotions. As a result of this lack in our education, a child who has not paid any attention to their emotional body develops bad habits and behaviours to compensate, until they learn how to properly process their emotions, if they ever do.

How Do We Go About Doing This?

The good thing about teaching emotions is, they can be implemented into any class and any grade. For example, if you were trying to teach emotions in a class with a number of kids who are about to graduate high school, a great starting point might be to illustrate just how much of an effect emotions can have, not just on a mental level, where unresolved emotions lead to negative action, but on a physical level as well.  The Institute of Noetic Sciences is doing some great work in this area, creating more awareness about non-material science and how our thoughts/emotions have an observable effect on physical material reality. The mind-body connection is truly powerful, and we should be teaching people how to harness that power.

As HeartMath Director of Research Dr. Rolin McCratey tells us, “By learning to shift our emotions, we are changing the information coded into the magnetic fields that are radiated by the heart, and that can impact those around us. We are fundamentally and deeply connected with each other and the planet itself.”

All of these facts, published researched papers, and more can be accessed at heartmath.org.

Related CE Article: What Science is Telling us About The Heart’s Intuitive Intelligence

One the most popular programs to begin teaching emotions was developed in 2005 by Marc Brackett, David Caruso, and Robin Stern of the Yale Center for Emotional Intelligence.

“The Yale Center for Emotional Intelligence uses the power of emotions to create a more effective and compassionate society. The Center conducts research and teaches people of all ages how to develop their emotional intelligence.”

It’s currently being used in more than 1,000 schools in the U.S., implemented for grades k-8.

The name, RULER, is an acronym for its five goals: recognizing emotions in oneself and others; understanding the causes and consequences of emotions; labelling emotional experiences with an accurate and diverse vocabulary; and expressing and regulating emotions in ways that promote growth.

What Exactly Are the Kids Taught?

RULER teachers kids to to focus on the underlying theme of an emotion they are experiencing rather than wasting energy trying to define it precisely. Grace Rubenstein from Ted.Ideas reports:

When an emotion grips you, explains Stern, understanding its thematic contours can help “name it to tame it.” Even though anger is experienced differently by different people, she explains, “the theme underlying anger is the same. It’s injustice or unfairness. The theme that underlies disappointment is an unmet expectation. The theme that underlies frustration is feeling blocked on your way to a goal. Pinning down the theme can “help a person be seen and understood and met where she is,” says Stern.

Just taking the time to contemplate an emotion when you feel it, and think about why it might be arising, is critical for emotional health. Typing these words here and now, I still find it unbelievable that we have chosen not to deal with such an important aspect of what it means to be a human being. Emotions are something all of us experience, yet we have no guidelines or advice on what we’re supposed to do with them.

Rubenstein offers an example of how RULER functions in the classroom:

RULER’s lessons are woven into all classes and subjects. So, for example, if “elated’ is the emotional vocabulary word under discussion, a teacher would ask students in an American history class to link “elated” to the voyage of Lewis and Clark. Instruction reaches beyond the classroom, too; kids are prompted to talk with their parents or caregivers about when they last felt elated. Researchers at the Yale Center for Emotional Intelligence has found RULER schools tend to see less-frequent bullying, lower anxiety and depression, more student leadership and higher grades. So why isn’t emotional education the norm rather than the exception?

Emotions are something all of us experience, all the time, every single day. They can be confusing, and hard to navigate, especially when they’re negative. By including emotional education into the school system, I believe future generations would be far less depressed, angry, and confused. They would be better equipped to handle difficult situations in their lives, and find it much easier to express their feelings in a healthy, productive way.

There’s still a long way to go when it comes to understanding human emotions, and how to teach/discuss them in the classroom at different grade levels, but RULER is an amazing step in the right direction and I hope we see more programs like this being developed in the future.