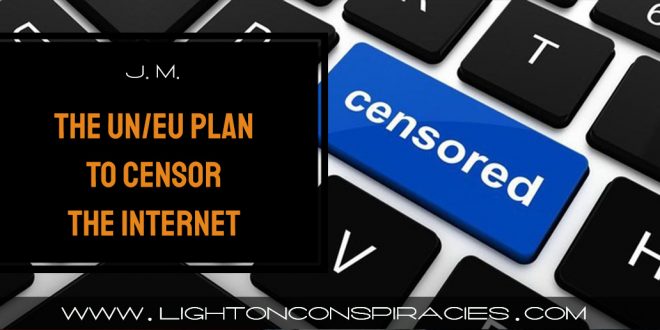 The U.N./E.U. Plan to Censor The Internet

In June 2019 United Nations launched its program “United Nations’s Strategy and Plan of Action on Hate Speech”. A represent from EU declares  that “terrorist content” must be removed from internet within one hour.

In June 2019 United Nations launched it’s program called “United Nations’s Strategy and Plan of Action on Hate Speech”. In his speech,  UN Secretary General António Guterres, said that there is a groundswell of xenophobia, racism, intolerance, violent misogyny and Antisemitism and that  the digital platforms are responsible for this. Guterres says that self-policing has to be done by social media and that the UN, governments, technology companies, educational institutions must work together regarding hate speech online.  Guterres blamed the terror attacks in Sri Lanka, Pittsburgh and Christchurch on social media.

Picture above:  responsible for  United Nations’s Strategy and Plan of Action on Hate Speech is Adama Dieng, the United Nations Special Adviser on the Prevention of Genocide.

In the video below, from the launching of the UN-program, Dieng says that UN’s plan is to address hate speech online that “challenges United Nations values, mandates and programs”. Dieng believe that social media should promote the values of “tolerance, non-discrimination and pluralism”. Dieng also states that people should be educated on the “values and skills of global citizenship” via Agenda 2030 and sustainable development. The whole video can be seen here.

The same month (June 2019) United Nations General Assembly had an Informal meeting of the plenary on “Combating Anti-Semitism and Other Forms of Racism and Hate – The Challenges of Teaching Tolerance and Respect in the Digital Age“.  European Unions Ms. Katharina von Schnurbein (European Coordinator on combating antisemitism) held her speech  and announced the EU-solution to hate speech.

Video above: Europeans Union Ms. Katharina von Schnurbein at her speech at UN.

There could not be a better moment and place to discuss this global threat to democracies and societies. Defending human rights is at the core of the European project and fight against Antisemitism is an intrinsic part of it. Contemporary Antisemitism comes in many forms,  it appears in its traditional racist form with roots in christian theology or is a part of Islamic extremism. It hides behind anti-Zionism or appears unmasked as conspiracy myths, Holocaust denial and Holocaust distortion. It is the responsibility for governments, of civil societies and of international organizations like this one to stand up against it.

“THE ROTHSCHILD’S, SOROS OR THE JEWISH STATE”

In history, every media revolution fueled not only progress but was accompanied by downsides, allowing extremists, hate-preachers, bigots and conspiracy believers to better connect and spread their toxic messages. In the 15th century the letterpress spread accusation of Jews as well-poisoning and child murderers. In the 20th century radio and TV were used by fascists and communists to spread Antisemitic  propaganda. Today internet has also become a melting pot of extremism. An unholy alliance of neo-Nazis, Islamists and far-left extremist joint in believing in a Jewish conspiracy that is controlling governments, the economy and the media. They call their enemies Rothschilds, Soros, Zionists or the Jewish state.

In a time when truth is challenged, conspiracy myths and Antisemitism flourish. It usually only takes hours for claims to circulate that “the Jews” were behind a catastrophe. Be it 9/11 or the recent Notre Dame-fire. And once online it never quite disappear again. Conspiracy theories mutate into hate speech and contaminate our  hearts and minds. EU, on all levels, has taken action. We chose to see, defy and condemn Antisemitism . In December 2018 all EU member states unanimously adopted a Council declaration on combating Antisemitism and protecting Jewish communities. As a result, national strategies on antisemitism should be adopted by the end of 2020. Protecting freedom of expression is an essential value gained in democracies which we have to defend against those that exploit this right by inciting hatred and violence.

In contrast to many other parts of the world EU has legislation that criminalize speech inciting hatred and violence, including Holocaust denial and distortion. In 2016 the EU-Commission pioneered the way and concluded a voluntary Code of Conduct with all big IT-companies such as Facebook, YouTube, Microsoft and Twitter in which they commit to take down flagged illegal hate speech within 24 hours in Europe. Three years on the Code of Conduct is delivering. While less then one-third of illegal hate speech was removed when we started, today almost three quarters of it are removed.

Currently civil societies organizations and courage citizens are usually at the fore of combating hate speech and thus even may become target themselves. Therefore we have also urged EU member states to increase their efforts to bring the perpetrators to court.

We know that hate speech can lead to hate crimes. All recent tragedies, in Paris, Pittsburgh, Poway, Sri Lanka or Christchurch have in common that the internet and social media played a role in radicalizing the perpetrators. Therefore the EU-Commission has proposed legislation recently that will oblige tech companies to to remove terrorist content within one hour by order of public authority. Companies will be liable across the EU for non-removal.

EU welcomes the United Nations’s Strategy and Plan of Action on Hate Speech and trust that it will be a game changer.

Share
Previous The Normals vs. Conspiracy Theorists
Next The Rise and Reversal of Anxiety and Depression