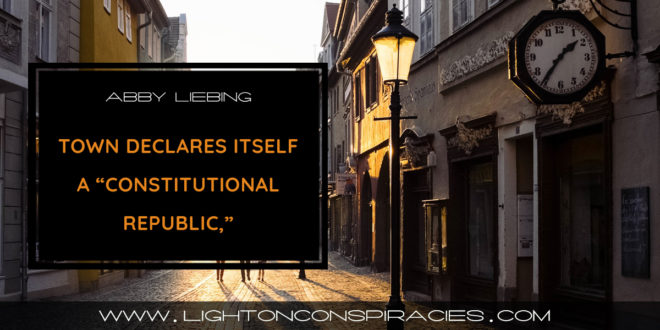 The town of Oroville, California, has declared itself a “constitutional republic” following over a year of restrictive coronavirus lockdowns and mandates in the state.

The bold move comes after Democratic Gov. Gavin Newsom issued an executive order that will extend parts of his March 4, 2020, emergency proclamation powers until March 31, 2022.

According to the East Bay Times, Oroville responded to the extension by declaring that it will not enforce “any executive orders issued by the state of California or by the United States federal government that are overreaching or clearly violate our constitutionally protected rights.”

The resolution was passed with a six to one vote at the city’s Nov. 2 council meeting.

“With all of these emergencies and leaders declaring emergencies it puts one person in charge and they can do pretty much what they want even when the emergency is no longer an immediate threat, they were they are reluctant to give up that power,” Oroville Mayor Chuck Reynolds said.

The town has had concerns about the mandates and changes that keep being enacted in California, especially with regard to COVID-19.

Councilman Dave Pittman pointed out that the measures the state government is trying to impose often infringe on personal rights and local governance.

Pittman particularly had concerns over things like the state and federal mask and vaccine mandates, Occupational Safety and Health Administration rules that are always changing, the California Housing and Community Development department rules and more.

“We stand by and believe in our constitution; our republic and we believe that many times others in state and federal government are exceeding their authority across the board in everything we do,” Pittman said.

“Mandates eliminate personal right of choice — to get vaccinated or not, to vaccinate your kids or not — and violate basic constitutional choice we all have.”

The town has made it very clear, however, that it is not promoting anarchy.

“This mandate is not saying we are against laws or for anarchy,” Scott Thomson, Oroville’s vice mayor told KOVR-TV. “We’re not talking about one mandate that’s been pushed on us recently … It’s a barrage of mandates.”

But not everyone in the town is supportive of this declaration.

Liza West is a resident who opposes the new measure that Oroville is taking.

“I think that we all believe in applying the law and agree in following the law, and this is just ridiculous,” West told KOVR.

There are also questions regarding the legality of the resolution that the town council has adopted.