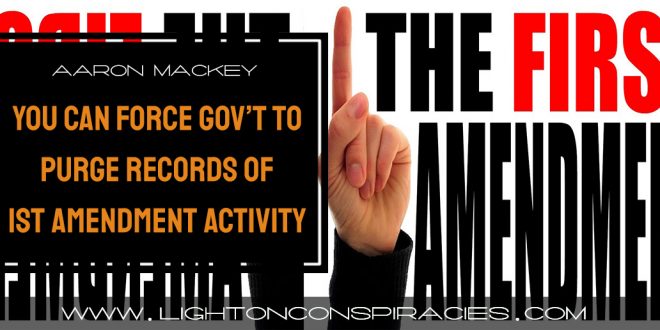 Victory! Individuals Can Force Government to Purge Records of Their First Amendment Activity The FBI must delete its memo documenting a journalist’s First Amendment activities, a federal appellate court ruled this week in a decision that vindicates the right to be free from government surveillance.

In Garris v. FBI, the United States Court of Appeals for the Ninth Circuit ordered the FBI to expunge a 2004 memo it created that documented the political expression of news website www.antiwar.com and two journalists who founded and ran it. The Ninth Circuit required the FBI to destroy the record because it violated the Privacy Act of 1974, a federal law that includes a provision prohibiting federal agencies from maintaining records on individuals that document their First Amendment activity.

EFF filed a friend-of-the-court brief in the case that called on the court to robustly enforce the Privacy Act’s protections, particularly given technological changes in the past half century that have vastly increased the power of government to gather, store, and retrieve information about the expression and associations of members of the public. For example, law enforcement can use the Internet to collect and store vast amounts of information about individuals and their First Amendment activities.

Congress passed the Privacy Act after documenting a series of surveillance abuses by the FBI and other federal agencies, including tracking civil rights leaders like Martin Luther King, Jr., and spying on political enemies by President Richard Nixon. The law established rules about what types of information the government can collect and keep about people. The Act gives individuals the right to access records the government has on them and change or even delete that information.  One of the most protective provisions is a prohibition against maintaining records of First Amendment activity. Law enforcement was given a narrow exception for records that are “pertinent to and within the scope of an authorized law enforcement purposes.”

The prescient fears of the Act’s authors have been proven true by forty years of technological innovation that have given the federal government unprecedented ability to capture and stockpile data about the public’s First Amendment activity.

In reversing a trial court’s ruling that the FBI did not have to delete the 2004 memo, the Ninth Circuit reviewed the language of the statute and concluded that the FBI did not have an authorized law enforcement purpose for keeping the memo. As the court explained, the Privacy Act’s expungement provision defines “maintain” as “maintain, collect, use, or disseminate.”

The court said that because the definition is broad, Congress intended for the statute’s protections to apply to all those distinct activities. Simply put, an agency facing an expungement claim under the Privacy Act must show that the record at issue is pertinent to an authorized law enforcement activity both (1) during the initial collection of the record, and (2) during the ongoing storage of that record.

Or as the court put it: “That is, if the agency does not have a sufficient current ‘law enforcement activity’ to which the record is pertinent, the agency is in violation of the Privacy Act if it keeps the record in its files.”

The decision is a big win in the fight against ever-expanding federal law enforcement surveillance because it provides a meaningful mechanism for individuals to force the deletion of records that document their protected First Amendment activities.

This is essential in an era when so much political and social advocacy takes place online. As EFF argued in its brief:

As with political spying throughout our nation’s history, police scrutiny of First Amendment activity on the Internet chills and  deters expression in this critical democratic forum, and leads to unfairly disparate snooping on the speech of minority communities and political dissidents.

Given EFF’s commitment to fighting surveillance, we look forward to building on this case to protect individuals’ rights to speak out against the government. Congratulations to the ACLU of Northern California, who represented the plaintiff in the case, for working to meaningfully restrict the government’s surveillance powers.

Aaron works on free speech, privacy, government surveillance and transparency. Before joining EFF in 2015, Aaron was in Washington, D.C. where he worked on speech, privacy, and freedom of information issues at the Reporters Committee for Freedom of the Press and the Institute for Public Representation at Georgetown Law. Aaron graduated from Berkeley Law in 2012, where he worked for EFF while a student in the Samuelson Law, Technology & Public Policy Clinic. He also holds an LLM from Georgetown Law. Prior to law school, Aaron was a journalist at the Arizona Daily Star in Tucson, Arizona. He received his undergraduate degree in journalism and English from the University of Arizona in 2006, where he met his amazing wife, Ashley. They have two young children.