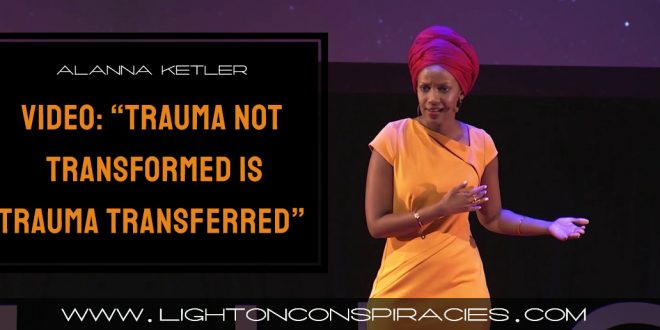 “Trauma not transformed is trauma transferred.” It is important to know that there are many different forms of trauma, not necessarily what you might expect — be it a car accident, a soldier on the front line or sexual abuse. We can become traumatized in many ways; we often carry our trauma as wounding from our childhood. Even those who think they had a fairly decent upbringing could still carry some trauma within them, to varying degrees.

So, what exactly is meant by the title of this article and aforementioned quote? A great example comes to mind of the devastating events that took place in Canada during the period of colonialism and extending up until the 1990’s; the mass extermination, cultural genocide, and displacement of the indigenous populations. Thousands of children were taken from their homes and forced into residential schools where they were forbidden from speaking their native language, beaten and often sexually abused. Because there weren’t really tools at the time to process these horrific events that occurred, many traumatized indigenous people turned to drugs and alcohol as a means of coping with all of the unprocessed pain they were carrying. Several generations later, and alcoholism is still rampant across the indigenous reservations of Canada. Sure, the younger generations were not exposed directly to the same type of trauma as their ancestors, however, because it was left unprocessed, but it was still passed on to the next generations and many of them still struggle with alcoholism. This is because, trauma not transformed is trauma transferred.

I can speak to this notion as alcoholism runs in my family as well — even though I am a Caucasian Canadian, with German and Icelandic roots. I’ve had my own struggle with addiction, but the more I am able to process my pain, the lesser the chance that this pain will be passed on to my offspring — should I choose to procreate.

I’ve heard before that the first one to awaken in the family is often tasked with the largest undertaking of healing trauma for the entire ancestral lineage — and that every time we do this work our ancestors rejoice that we are choosing to end the cycle, and do what is required to heal, rather than transfer our trauma onto the next generations.

Let’s Take A Step Back To This Present Lifetime

Take a grown man, who physically abuses his wife — perhaps when he was a young child, he witnessed his father doing the same to his Mother, this alone is traumatizing for a child to witness. If that trauma is left unprocessed, that child may grow up to be a man who abuses his wife. Having never known another way to be, this pain can manifest into abusive behaviour, however, it could also be a catalyst to heal.

Luckily, we are living in a time where people are becoming aware of the importance of doing sincere self-work, so many are ending theses cycles of trauma in their lineage.

The video below is of a ted talk given by Tabitha Mpamira-Kaguri and it provides some excellent examples of the topic at hand.

Pain left unprocessed will almost inevitably passed on. It is important to do the work that is required to release your pain and your trauma to not only set yourself free, but to free everyone else from this cycle. This is all one aspect of what it will take to create the new earth that we dream of and also relates to CE’s motto — Change starts within. It starts with us, with each of us, taking radical responsibility for ourselves, our actions and how we treat those around us.

Share
Previous Order Out Of Chaos: Outbreak to Microchip
Next Why the Drug War Makes Drugs More Potent