What Christianity Looked Like Before The Birth of Jesus Christ

One of the things that always intrigues me is the historical basis for certain philosophical and metaphysical concepts. We often simply take for granted that the memes or ideas of our time have always been the basis for “truth” – and in our scientific age that can be a huge distortion.

I remember when I read A New Earth and Oprah hosted Eckhart Tolle in a webcast series, and many people calling in wondered at his references to the parables of Jesus, and whether there was a connection with Christianity.

Oprah tried to soft pedal the fact that Eckhart’s teaching is secular, which is problematic for fundamentalist Christians – but is there a connection going further back?

One of my favorite ideas from Eckhart’s work is his interpretation of the notion of the “Kingdom of Heaven” not as “someplace else” or in the sky, but rather as a state of being resulting from questioning, and ultimately not believing your thoughts.

In the 20th century a major discovery was the Dead Sea Scrolls and similar documents that revealed the Gnostic Gospels – a different set of historical interpretations of the teachings of Jesus, that looked at sin as believing your thoughts – and resisting what is with mental struggle and turmoil.

This resistance and suffering would, of course, be the opposite of the “Kingdom of Heaven”.

In The Gnostic Mystery by Randy Davila, the author weaves an interesting thriller around such a newly discovered scroll and also takes the opportunity to summarize this discovery of an ancient Christian doctrine as a psychological teaching along the same lines – the researcher in the book says that the key to Gnosticism was nonresistance to reality, and suffering was viewed in the teaching as the result of struggling with what is and hypothesizing alternate realities that “weren’t”.

This made me think of Gurdjieff, who was ever mysterious and veiled in his claims about the source of his teaching–which also included deep physical and psychological inquiry into the nature of thought. Gurdjieff posited the existence of three brains that need to work harmoniously in order to connect to higher wisdom and suggested that modern humans are asleep and oblivious to their true nature.

But in addition to mentioning a map to “pre-sand” Egypt which fueled his journey to the pyramids (where he worked as a guide) Gurdjieff would suggest that his teaching was the “true” Christianity – preceding the life of Jesus, as well as the Egypt of the pharaohs with its source in “prehistory.”

While much of Gurdjieff’s ideology can be viewed as “Eastern” and he may have traveled to India and Tibet, a deeper look at his cosmology and biological notions suggest that what he brought to light may have been the original and undistorted teaching of a superior civilization that eventually gave way to both Egyptian and Meso-American cultures that attempted to preserve its scientific wisdom.

A modern philosopher and scholar who writes in depth about Gurdjieff in relation to modern issues, Jacob Needleman probes this aspect of the teaching in his book, Lost Christianity.

In this book Needleman engages with a scholar and monk whose research has taken him deeply into the sources of Eastern Orthodoxy and more esoteric interpretations of scripture. Needleman writes:

“What has been lost everywhere in the life of man is the confrontation within oneself of the two fundamental forces of the cosmic order: the movement of creation and the movement of return, the outer and the inner. The whole of what is known as “progress” in the modern world may be broadly characterized as an imbalanced attention to the outward-directed force of life, combined with a false identiﬁcation of the “inner” as the realm of thought and emotion. The thoughts and emotions that are given the name of ‘inwardness” actually serve, as has been shown, the movement outward and degradation of psychic energy. In Christian terms, this is “ﬂesh.” Thoughts and emotions are not the soul.”  (222)

What this suggests is that the original “pre-Christian” teaching was about inner energetic knowledge and the discovery of man’s true nature through deep inquiry and concrete experience.

The quote above actually suggests the Advaita inquiry of Neti Neti – “not this, not this” – in the pursuit of reality and the resulting recognition that what “I am” as not my thoughts, not my emotions, and not my sensations; the body is experienced as yet another “external” object to one’s true being.

This is indeed a very timeless notion of truth that we now may see as “eastern” or “mystical,” but one that has been preserved in stories since the dawn of time. Joseph Campbell brought many of these stories to light in his work (which inspired the Star Wars films) and one can find more information in Bernardo Kastrup’s latest book, More Than Allegory: On Religious Myth, Truth And Belief.

Bernardo, who also wrote Why Materialism is Baloney eschews the low hanging fruit of fundamentalist religious dogma to probe more deeply the sources of wisdom in our psyche and in our historic heritage of myth that suggest connection to higher energies and influences.

Of course science itself has given us the basis for this – we know that we use wifi (wireless) transmission of energy every day and our computer software encodes active conceptual intentions and produces results without human intervention – suggesting that mental energy and truth does not need a physical foundation in order to “exist.”

In addition to these connected efforts to unearth the sources of wisdom that may have been lost, the actual historical civilizations that modern history seems to avoid even mentioning are covered books like Chariots of the Gods, by Erik von Daniken and more recently in Magicians of the Gods: The Forgotten Wisdom of Earth’s Lost Civilization by Graham Hancock.

It may well be that we are on the verge of rewriting not only our history of science and religion, but in fact the history of the origin of our species as we connect these various dots and rethink even the basis of religions we have always taken for granted: Judaism (with the Kabala and its mystical aspects) and Christianity as being sourced not in the teachings of Jesus, but in the ancient history of mankind itself.

Much of the daily content we publish is notable to us for various reasons. Having said that, the views and opinions expressed in this content, (articles, videos or any other content), are those of the authors and do not necessarily reflect the opinions of the authors of this site. As always, please do your own research. Please do not believe what you are told. Take what you like, and leave the rest.
Previous Are you poisoning yourself with commercial toothpaste?
Next A Tale of Two Bubbles: How the Fed Crashed the Tech and the Housing Markets 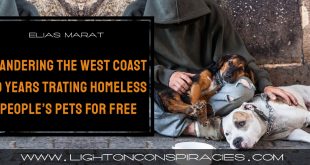