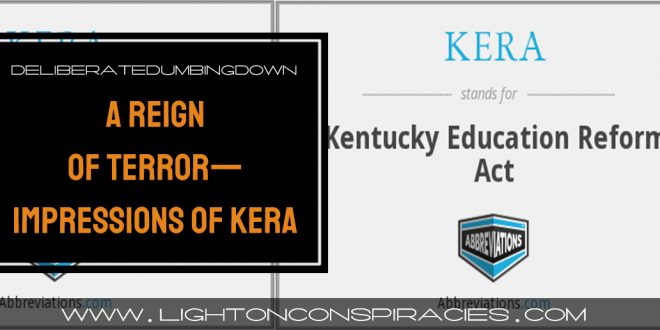 A Reign of Terror—Impressions of KERA

This letter proves how our nation’s excellent public school teachers were vehemently opposed to the restructuring everywhere it was implemented.

Eddie Price, a 39-year-old social studies teacher with seventeen years of teaching experience, wrote “A Reign of Terror—Impressions of KERA” which appeared in the December, 1993 issue of The Hancock Clarion of Hawesville, Kentucky. Excerpts from his important and, one might point out, extremely courageous article follow:

I would never do anything to jeopardize my teaching career or, even more importantly, the security of my family, but I MUST speak out against what I perceive as a massive wrong in education—the Kentucky Education Reform Act (KERA).

The perpetrators of KERA began inundating our schools with mountains of regulations, restrictions, and KERA mandates… When we expressed our concerns we were told “Be patient… Give KERA a chance…

Teachers, we need your help. This is a partnership. KERA’s Outcomes appeared to throw the hard, objective, factual subject matter out the window in favor of affective goals (more concerned with emotions and feelings). Our curriculum would have to be pared down and structured around values and attitudes. When teachers voiced concerns about not meeting the Valued Outcomes, they were “soothed” with the explanation that schools would be given the chance to improve. “A ‘Kentucky Distinguished Educator’ will be sent to your building to help you grow.” Then I learned that this official had the absolute power to declare the school “A School in Crisis”! The principal, and individual teachers could be eliminated with the single stroke of a pen. Past performances, evaluations, educational degrees, experience, awards, student achievement outside of KERA would mean nothing…

When I sat down and read the entire history of KERA’s evolution, I realized that our lawmakers and, even worse, our public had been skillfully and strategically duped. KERA had been slickly packaged in deceptive language of “glittering generalities” that the public seemed eager to swallow in the name of reform. Who could argue with such glossy words as “excellence,” “revamping,” “progress,” “outcome-based,” “self-esteem,” etc., unless they are “traditional,” “hidebound,” “inflexible,” and “resistant to change”? I realized that our distinguished and infallible commissioner basked in the full limelight of a press he had masterfully managed. Kentucky newspaper editors had been appointed to state committees in the name of “progress” and their editorials provided—free of charge—an excellent soapbox from which to indoctrinate the public. Pro-KERA articles and comments have no problem making headlines while others with opposing views must pay exorbitant sums for “political advertisements.” School principals and test scores can be subjectively manipulated from above to bring down the Kentucky Distinguished Educators upon schools “not politically correct.” For a “dissident,” teaching in the public schools today is similar to living under a Stalinist “Reign of Terror.”

This is all so incredibly un-American that someone, maybe the FBI again, must investigate our legislature to discover how and why such a massive piece of legislation passed without more discussion. How many millions have already been squandered? How many millions more? No one truly had a chance to examine it fully. The public education hearings held across the state were structured around a preconceived plan devised by a national organization—the Pritchard Committee. The whole thing was rammed down the public’s throat before anyone could mobilize. Most concerned were placated by the false notion that parents and teachers would have more control with the “depoliticalization” of education. The end result? Our local, elected school boards (those most responsive to a community’s needs) were virtually stripped of their power while state control drastically tightened. The state now mandates the outcomes, approves the curriculum, trains the teachers, and judges the performance of students—all of which must conform to KERA.

[Ed. Note: Had the media, over the past ten years, been willing to publish the many articles and letters to the editor which mirrored Eddie Price’s concerns, the national restructuring effort would be dead in its tracks. Even with censorship of opponents’ views, restructuring has run up against intense opposition and is “in deep trouble.” An article which appeared in the October 10, 1998 issue of the Louisville, Kentucky Courier Journal entitled “Kentucky Schools Test Scores Vary Little from Last Year” shows that KERA has been a total flop, as have all the other multi-million dollar, corporation-backed state reform acts implemented across the country. Wherever Carnegie’s David Hornbeck goes one can expect a first-class academic flop! Of course, flops are essential in order to convince the public that “workforce training” is the solution—the deliberate dumbing down at work.]