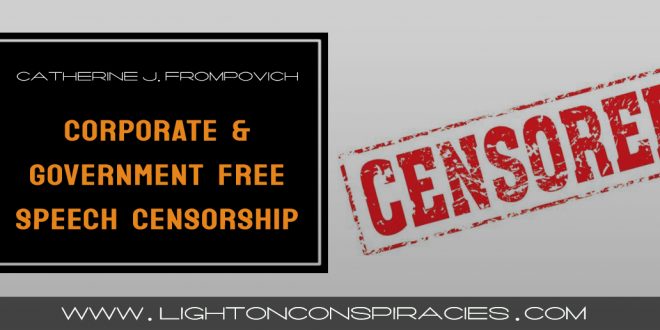 Congress shall make no law respecting an establishment of religion, or prohibiting the free exercise thereof; or abridging the freedom of speech, or of the press; or the right of the people peaceably to assemble, and to petition the Government for a redress of grievances.

How come corporations—especially Internet telecommunications networks and their owners, social networks and self-appointed left-wing activist censors, can curtail and abridge guaranteed freedom of speech for citizens, while the U.S. Government stands by abetting a serious abrogation of the U.S. Constitution First Amendment Bill of Rights by self-appointed ‘police state’ activist individuals and/or corporations?

What role does the 2010 SCOTUS decision giving corporations the same rights as people play in such censorship?

“Justice Kennedy’s majority opinion found that the BCRA §203 prohibition of all independent expenditures by corporations and unions violated the First Amendment’s protection of free speech.[29] The majority wrote, “If the First Amendment has any force, it prohibits Congress from fining or jailing citizens, or associations of citizens, for simply engaging in political speech.”

If SCOTUS majority ruled the First Amendment “prohibits Congress from fining or jailing citizens, or associations of citizens [e.g., corporations, private businesses, Internet platforms, etc.] for simply engaging in political speech,” how did such a decision morph into apparently ‘legally’ enforced censorship to control public interest dialogue, “Town Hall discussions,” educational memes and differing scientific research data regarding vital subjects for citizens to learn about and discuss such as:

“If we’ve been bamboozled long enough (even in medical school), we tend to reject any evidence of the bamboozle. We’re no longer interested in finding out the truth. The bamboozle has captured us. It’s simply too painful to acknowledge, even to ourselves, that we’ve been “taken”. Once you give a charlatan power over you, you almost never get it back.” –  … Carl Sagan, author of “The Demon-Haunted World: Science as a Candle in the Dark”

The present-day censorship by vested interests is comparable to the book-burning of the German Nazi regime:

The Nazi book burnings were a campaign conducted by the German Student Union (the “DSt”) to ceremonially burn books in Nazi Germany and Austria in the 1930s. The books targeted for burning were those viewed as being subversive or as representing ideologies opposed to Nazism.

And then there’s this explanation:

A Brief History of Book Burning, From the Printing Press to Internet Archives

As long as there have been books, people have burned them—but over the years, the motivation has changed.

According to Knuth, the motives behind book burning changed after the printing press helped bring about the Enlightenment era—though burning through the collateral damage of war continued to arise (just consider the destruction of the U.S. Library of Congress during the War of 1812 or all the libraries destroyed across Europe during World War II). People saw knowledge as a way to change themselves, and the world, and so it became a far more dangerous commodity, no longer controlled exclusively by the elite. What better way to reshape the balance of power and send a message at the same time than by burning books?

Currently, it’s modern Internet technology information platforms [with backdoors to federal government ‘secret ops’ agencies] that have become ‘information burning’ censors.  How much longer will we allow that to continue?

Share
Previous New World Order – Geoengineering and Chemtrails to impact Colorado in 2019?
Next WIND TURBINES, VIBRO ACOUSTIC DISEASE AND THE EVER GROWING HERD OF ELEPHANTS IN THE ROOM