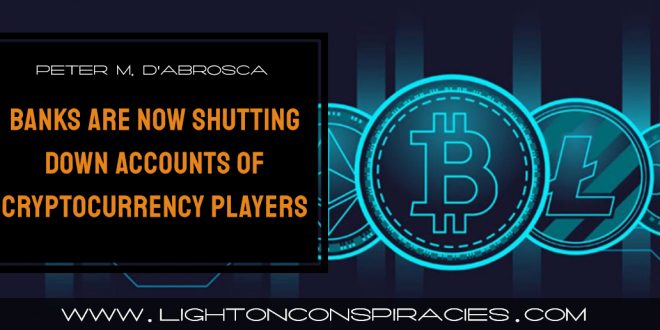 Banks Are Now Openly Shutting Down Accounts Of Cryptocurrency Players When right-wing figures like our own Laura Loomer, Proud Boys chairman Enrique Tarrio, and others were banned from PayPal and other payment processors, we sounded the alarm on the potential un-personing from the financial system based on arbitrary factors like political beliefs. Such decisions are nearly always made by executives who hide within their faceless organizations, and never seem to disclose the reasons for the un-personing.

When Chase Bank suspended Loomer’s access to her online bank account, disabled her debit card, and shut down Tarrio’s checking accounts based on their right-wing activism, we again sounded the alarm, but this time louder.

Today, we find ourselves in siren mode yet again. It appears that banks are shutting down the accounts of cryptocurrency executives, perhaps in an attempt to intimidate them.

“According to a report by U.Today, Tron founder Justin Sun recently received a notification from the Bank of America saying his account would be shut down,” Decrypt reported. “Sun announced the news on Twitter in reply to former PayPal executive and Silicon Valley investor Roelof Botha, who has also had his account closed.”

Botha, PayPal’s former CFO, has his hands in several other projects in Silicon Valley. He announced the news of his deplatforming from the bank Sunday.

“After being a customer of @BankofAmerica for 20 years, I received this notice today that they decided to fire me as their customer! With absolutely no explanation,” he said.

After being a customer of @BankofAmerica for 20 years, I received this notice today that they decided to fire me as their customer! With absolutely no explanation…. pic.twitter.com/IJu3peiIWX

The bank said it has looked over Botha’s account, and that it had simply decided to close it.

“After a careful review of your banking relationship, we’ve made the decision to close your account above,” Bank of America said.

“I have been a customer of @BankofAmerica for 8 years and get fired as well.” Sun said in reply in a now-deleted tweet.

According to Decrypt, other cryptocurrency players speculated that the ban was related to the pair being involved in the purchase of bitcoin.

“Vinny Lingham, CEO of blockchain platform CivicKey, questioned Botha whether he had bought any Bitcoin. TechCrunch founder Michael Arrington has expressed similar thoughts, saying: ‘My only guess is he bought bitcoin,’” the report said.

After being a customer of @BankofAmerica for 20 years, I received this notice today that they decided to fire me as their customer! With absolutely no explanation…. pic.twitter.com/IJu3peiIWX

In the future, cryptocurrencies might have the potential to change the power structure of the financial sector permanently. Decentralized blockchain technology takes the power out of the hands of central bankers, and puts it into the hands of the creators of various blockchain based cryptocurrencies. Cryptocurrencies, though still largely an unknown quantity, are generally finite in the total amount that can be created, which could make them more reliable than the dollar, which is a fiat currency no longer backed by the gold standard.

Meanwhile, Silicon Valley continues to boot politically conservative users off of various social media platforms under the guise of “hate speech” and “terms of service” violations simply for sharing ordinary conservative opinions. Most recently, Tarrio, who is running for Congress in Florida, was banned from having a Twitter account for his campaign. Last week, Loomer’s campaign attempted to create a campaign Facebook page. Within 24 hours of its creation, Facebook banned Loomer’s congressional Facebook page and issued a statement saying people who have previously been banned would not be allowed to create accounts, even if they are running for office or win their elections.

Moving forward, we can expect to see the fight to un-person cryptocurrency investors and conservative content creators intensify as this grapple for power over the financial industry becomes more digitalized. As technology advances, the concerted efforts by big tech to silence anyone and everyone who effectively opposes and exposes the political elite and establishment will grow more Orwellian.

Share
Previous The Power of Human Emotions & How Schools Are Failing To Teach Children How To Deal With Them
Next The Truth Seeker – Article Series, Part One