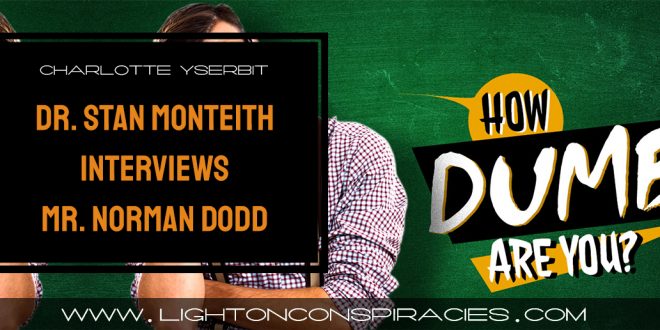 The First interview with Norman Dodd was by Dr. Stan Monteith shortly before Mr. Dodd Passed away circa 1980s. He reveals the hidden truth about the Tax Exempt Foundations as chief investigator in The Reece Committee Report authorized by Congress. This is about The Rockefeller, Carnegie, and Ford Foundations who since the turn of the century have set out to influence and manipulate the education and morals of not only the USA but Countries Globally. Reduced standards of Education and sexual promiscuity of today have their roots in these Foundations. He states that the foundations were very influential in instigating conflicts around the world. “This may be one of the most important videos you will ever see”.

I have taken the time to transcribe the text of this portion of Monteith/Dodd interview since it explains Ford Foundation’s role in the deliberate attack not just on academic education, but especially on Christian morality which had been previously fostered in american public schools and in the curriculum. I do not believe Dodd discussed this specific attack on Christian values in any of his other interviews.

Once you have read this transcript you will be motivated to listen to the entire interview which covers Dodd’s role in his investigation of the Carnegie Corporation and explosive history behind its funding of American textbooks to focus on global government: the who, why, where, and how THAT happened and why any generation educated after the creation of Carnegie-spawned United Nations between 1908 and 1945 was educated away from traditional American history: and role of our Founding Fathers and emphasis on the Constitution of the United States of America.

The role of the Carnegie Foundation in changing America’s economic system from capitalist to planned economy, and in some cases, to take our land, is thoroughly discussed in Carnegie’s Conclusions and Recommendations for the Social Studies, 1934.

I urge you to listen to the entire Monteith/Dodd interview, but, in particular, to READ the transcript below, and to forward to your lists.

SM: What did you find out was the goal and stated objective of the great American foundations?

ND: We found out, Doctor, that these foundations had as their objective the orientation of the people of this country toward an idea of collectivism, thereby nullifying for good and for all the commitment of our country to individualism which was the feature of the country at the beginning.

SM: Now, how did they go about doing this?

ND: Well, primarily they did it by securing control of what is known as the money supply of the people of this country.

SM: You are speaking now of the money supply that was going into education?

ND: Well, the money supply of the people of the country as a whole.

SM: And how did they do this?

ND: By working out a system of banking (Federal Reserve) which was foreign in concept but which enabled debt to be monetized; transforming of the bank deposits..

SM: What did you find out was the goal and stated objective of the great American foundations?

ND: We found out, Doctor, that these foundations had as their objective the orientation of the people of this country toward an idea of collectivism, thereby nullifying for good and all the commitment of our country to individualism which was the feature of the country at the beginning.

SM: How did they specifically set out to influence education in America?

ND: By having at their disposal unlimited quantities of this newly created money and being able to reward the personnel who were active in the world of education and administratively as well as academically.

SM: Were they able to influence textbooks of the teachers?

ND: Yes. They were able to see that textbooks were almost produced on order. And assuring the publishers of textbooks of the funds necessary to make publication of those books profitable.

SM: Have you personally had contact with some of the directors of these great foundations?

SM: Could you tell us about it?

ND Well, I will…using a couple of instances as an illustration. One instance had to do with my responding to an invitation from the President of the Ford Foundation who asked me when I was next in New York would I stop in their office and have a visit, which I did and on arrival after a few amenities Mr. Gaither , who was the President, said “Mr. Dodd: “We invited you to come see us this morning, hoping that you would, off the record,tell us why the Congress was interested in operations of the foundations such as ours. And before I could respond he volunteered the following:

“Mr. Dodd, those of us here at policy making originally have all had experience with the OSS (Office of Strategic Services) or the European Economic Administration, operating under directives, the origin of which was The White House. We operate today under just such objectives. Would you like to know what the substance of the these directives is?

ND: I said “Yes, Mr. Gaither, I’d like very much to know. Whereupon he said to me “The substance of the directives under which we operate is that we shall use our grant making power so to alter life in the United States so that we can be comfortably merged with the Soviet Union.”

Well, figuratively I nearly fell off the chair. But I did remark to him:

“Mr. Gaither. In the light of what you just told me, many of your grants make sense. I can understand them, but I do not think you are entitled to withhold this information from the people of this country to whom you are beholden for your tax exemption, so why don’t you tell them what you just told me? His answer was “Mr. Dodd, we wouldn’t think of doing that.”

So I said: “Well, Mr. Gaither, I will answer your first question. You are forcing the Congress of the USA to spend $150,000 to find out what you just told me.”

ND: It is only in light of that policy that these events and effects make any sense. And this is our problem: They cannot avoid having effects from the grants that they make. Therefore , those in this country are concerned with “what are they up to?” Mainly we have to look at the effects and work back and compare the effects of the grants with the explanation of the grants in the first place.

ND: Original purpose was in no sense to eliminate bank failures. This was argument used to swing approval of the Federal Reserve, and this discrepancy and these contrasts and contradictions are the telltale part that those who have imposed these practices on us as a people, and they are scared to death that it is going to be picked up and stressed and taught, etc. But it isn’t.

SM: No, and the mass media doesn’t allow it to be talked about. Neither does the educational world.

ND: This is what will meet the challenge: An accredited educational institution, with trustees, who openly declare that “We notice this; we notice the inconsistency, the contradictions, and we are setting forth an effort to account for them and that, in my opinion, would expose the whole network.”

And they have told me that this is what they are scared to death of.

That somebody is going to pick up the string.

SM: Mr. Dodd: What do you think is the crux of this whole problem?

ND: Well, Dr., I feel that the problem, its origins with that aspect of human life which condemns men collectively to experience what is known as THE FALL OF MAN. And that Christ came into the world with a knowledge that the individual could confront this condition and not become victimized by it but that that entailed the individual emulating Christ who saw the temptations in the world. And this was confronted by the Satanic, listening to what the Satanic had to offer and say “NO”. And said “I know you to be Satan, and then Satan went away.”

That, to me is the choice on how to nullify this influence which has had humanity in its grip for centuries. Well, of course what that means is one has to accept the realism of the inclusion of evil and that in turn challenges the world of education to equip the student with the knowledge necessary to recognize evil in action and within the sphere of his own experiences, and refuse to be a part of it. Then this influence which has been behind the grasp of the network can’t operate. It cannot operate in the light. And admittedly, it says – acknowledges that it is – those who are part of it, knowingly are scared to death that somebody would, at some point, as they put it, will pull up the end of a string and little by little follow it to the end and as they put it to me “when that happens we are through.”