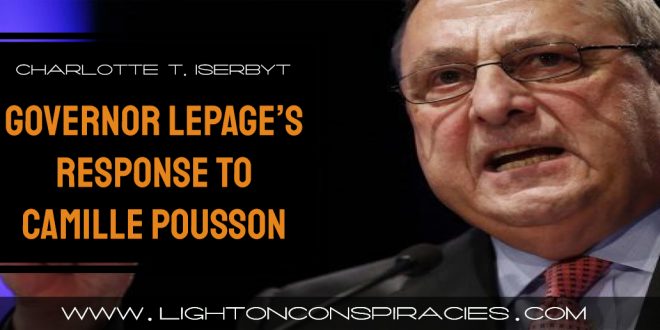 This article contains verbatim exchange of correspondence between Camille Pousson, patriot in Louisiana, and Republican Maine Governor LePage dated December 4, 2017 and December 8, 2017, respectively. Below is copy of Camille’s letter to Governor with his handwritten notes in margin and the envelopes of the various officials to whom it was sent. Below that is the response from DC. [click each for larger, readable view] 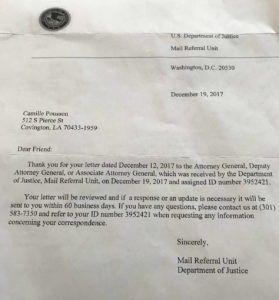 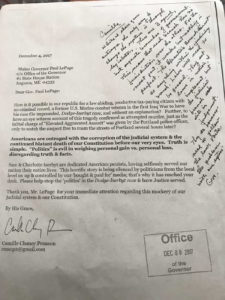 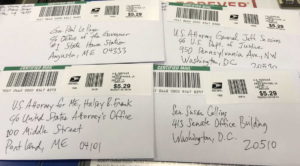 Can you believe I have emailed Governor LePage at least twenty times regarding what happened and he has never responded? However, he did, at least, respond to Camille.

Does the separation of powers keep the Governor from discussing this issue with Maine’s Senate Delegation (Republican Senator Susan Collins and Independent Senator Angus King)… both of whom have been advised regarding the two attempted murders of Sam? Neither one of them has responded to our inquiries. (Are we constituents or not?) In fact, Sam, at one time was told by one of the minions in Sen. King’s office “You are on our ‘no call’ list”

Transcript of exchange of correspondence between Camille Chaney Pousson of Louisiana and Republican Maine Governor Paul LePage regarding sealing/ impounding of the Dodge/Iserbyt file, without any explanation, follow. Such impoundment could be in violation of the First Amendment to the Constitution, unless unusual circumstances exist for such impoundment. Sam, the victim, had nothing to hide; all his testimony came from official discovery materials. What does Maine’s Justice System have to hide regarding the activities of the “suspect”, Frederick Otis Dodge? Sam’s attorney filed a Motion to unseal the file; Motion was denied. WHY?Item

“Congress shall make no law respecting an establishment of religion, or prohibiting the free exercise thereof; or abridging the freedom of speech, or of the press; or the right of the people peaceably to assemble, and to petition the government for a redress of grievances.”

How is it possible in our Republic for a law abiding, productive tax-paying citizen with no criminal record, a former U.S. Marine combat veteran in the first Iraq War, to have his case file impounded, Dodge-Iserbyt case, without an explanation? Further, to have an eye witness account of this tragedy confirmed as attempted murder, just as the initial charge of “Elevated Aggravated Assault” was given by the Portland police officer, only to watch the suspect free to roam the streets of Portland several hours later?

Americans are outraged with the corruption of the judicial system & the continued blatant death of our Constitution before our very eyes. Truth is simple. “Politics” is evil in weighing personal gain vs. personal loss disregarding truth and facts.

Sam & Charlotte Iserbyt are dedicated American patriots, having selflessly served our nation their entire lives. This horrific story is being silenced by politicians from the local level on up & controlled by our “bought and paid for” media; that’s why it has reached your desk. Please help stop the ‘politics’ in the Dodge-Iserbyt case & have Justice served.

Thank you, Mr. LePage for your immediate attention regarding this mockery of our judicial system and our Constitution.

By His Grace,
Camille Chaney Pousson

Camille: While I share your outrage the only way to change the system is through legislation. There are 3 equal, but separate branches of government.

This means that each branch has no jurisdiction over the other. For the most part , it works but nothing is perfect. The executive Branch cannot do anything within the judiciary branch. Laws will need to be passed. They set laws in motion; I implement, but the judicial branch sits in judgment. They do, however, need to follow the law. “Voila”: the problem with our system. Gov.