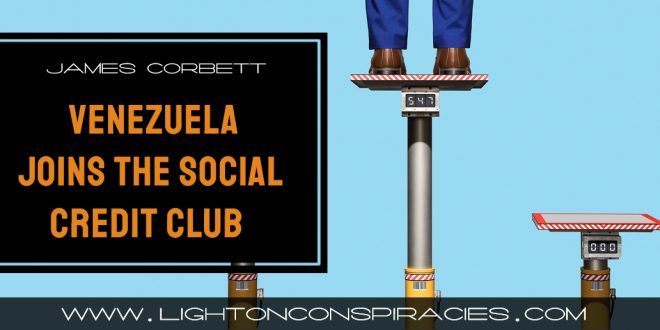 So you’re familiar with China’s social credit system by now, right? You know, the one that I’ve been talking about for years? The one we had a sneak preview of 8 years ago in “You Are Being Gamed?” The one that’s being trial-ballooned at home via Carrot Rewards and other “motivational” point systems?

Yes, I dare say you do, because even if (for some unfathomable reason) you haven’t read, watched or listened to everything I’ve ever done relating to the Chinese social credit scheme (tsk tsk), then you’re probably a TV-addled fluoride head who’s learned all about it from the MSM repeaters.

But for those two or three people who have been living under a rock for the past few years and somehow managed to avoid the story entirely, here it is in a nutshell: The Chinese government is planning to assign a “social credit” score to every single citizen by the year 2020. The score is a measure of your behaviour. When you follow the rules, obey Communist Party dictates, spread government-approved propaganda on social media and generally behave like a “good citizen,” your score will go up. Conversely, if you break the rules or otherwise act like a “bad citizen,” your score will go down.

So what constitutes a “bad citizen?” Well, if I was doing my work in Chinese you could bet your bottom yuan that “visiting corbettreport.com” would be on the list of no-no’s that would get your score docked. Jaywalking, buying too many video games, posting links to sites that promote political wrongthink, even associating with people whose credit score is too low; all of these activities and basically anything else that goes against the Communist Party’s wishes—even (gasp!) walking your dog off leash—will send your social credit score plummeting.

Then what’s the consequence if your score sinks too low? Oh, you’ll be barred from public transit. Your children will be denied access to private schools. You’ll be prevented from obtaining a variety of jobs. You won’t be able to stay at certain hotels. And that’s just for starters. Once the system gets rolling, it’s quite obvious that those who are ranked below a certain social credit score will be a literal underclass, forced to eke out whatever meager existence they can cobble together on the margins of society.

Previous Are We Microchipping Our Way Into Madness, Menstrual Problems, Miscarriages, And Other Maladies?
Next Johnson & Johnson Knew About Asbestos in Baby Powder for Decades