As the people of Chile enter the second month of massive protests against the neoliberal government of President Sebastian Piñera, clashes have continued unabated between demonstrators and the militarized security forces of the South American state.

The protests, which began October 14 as a response to rising public transit costs, have quickly become radicalized as social movements, students, workers’ unions, and a vast cross-section of Chilean society have focused their anger on high levels of inequality in the country, rising living costs, and a constitution inherited from the 1973-1990 dictatorship of Augusto Pinochet.

As the protests have raged, the repression unleashed on demonstrators has become increasingly brutal and high-tech. Chile’s protesters, however, have responded with a combination of ingenuity, persistence, and equally high-tech tricks to fend off police attacks.

Such was the case earlier this week in footage that quickly went viral on social media Wednesday that appeared to show a police unmanned aerial system (UAS) being disabled as protesters aimed run-of-the-mill green laser pointers—the type available in any Office Depot or Staples—at the law enforcement-grade drone.

The video, which NextGov reports first made its appearance Tuesday night on Reddit, shows the drone hovering above a sea of demonstrators as the lasers are trained on it. Soon, multiple other lasers are trained on it and when the drone attempts to escape, the lasers have an almost tractor beam-like effect, forcing the UAS to falter before it helplessly descends to the ground.

Laser lights at demonstrations didn’t first appear in Chile. The pointers have had a ubiquitous presence at the raucous demonstrations in Hong Kong, where protesters have also used the lasers to disable surveillance cameras equipped with facial recognition technology.

And as Defense Maven reports, U.S. Army Stryker vehicles are also being equipped with laser weapons that would be used to disable and knock out incoming flying drones.

However, the consumer-grade lasers at Chile’s protests are hardly the type that can chew through armor or burn through flesh, like military laser cannons might. Instead, these lasers likely either blinded the camera feed of the human operator or disabled the drone’s altitude sensors, triggering the drone’s emergency autonomous landing capabilities

While the lasers have proved effective in such a grassroots, mass-uprising context, some experts say the lasers are unlikely to pose a major danger to drones.

Christopher Williams, who heads Citadel Defense Company, which hopes to deploy an anti-drone “bubble”-based system for U.S. Customs and Border Protection along the U.S. southern border, told NextGov:For now, however, the lasers designed for office presentations rather than for military tactical purposes appear to be working just fine for the combative Chilean people taking to the streets to demand greater social and political rights.

Much of the daily content we publish is notable to us for various reasons. Having said that, the views and opinions expressed in this content, (articles, videos or any other content), are those of the authors and do not necessarily reflect the opinions of the authors of this site. As always, please do your own research. Please do not believe what you are told. Take what you like, and leave the rest.
Previous To Save Face, Coca-Cola Designs A Bottle Made Out Of Ocean Waste Plastic
Next The Harvard walkout: ‘Israeli officials will eventually speak to empty venues’ 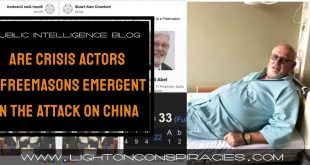