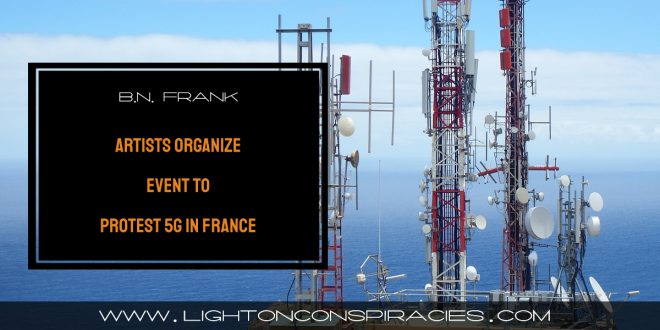 Opposition in France is growing among citizens and legislators as well (see 1, 2).  Last month, radiation measurement devices were installed inside 5G towers and a French TV station aired a segment about health risks from 5G and wireless exposure.  Protesters also stopped trees from being cut down for a 5G antenna.  More recently, artists took to the streets to demonstrate their opposition.

A collective of artists, called Les Déconnectés, organized an artistic event in Bordeaux to protest against 5G in France.  According to Les Déconnectés collective, 5G “is not a simple faster speed phone plan” but “will shape our cities and our lifestyles” and “penetrate beyond the intimate sphere of the body.” See EHT’s PDF of the latest government action on 5G and cell towers.

The majority of scientists worldwide oppose 5G deployment.  Since 2018, there have been reports of people and animals experiencing symptoms and illnesses where 5G has been installed (see 1, 2, 3, 4).  Of course other sources of wireless emit harmful radiation too.  Last year, the World Health Organization warned that high levels of Electromagnetic exposure could lead to health issues in a significant portion of the population.

High speed internet is achievable, safer, and more secure with hard-wired internet connections.  Nevertheless, 5G and other sources of wireless are still abundantly being installed in some parts of the world despite warnings and opposition (see 1, 2, 3, 4, 5, 6, 7, 8, 9, 10, 11).

Share
Previous The Lawsuit That Could End Covid-1984 with Dr. Pam Popper
Next A Forest Garden With 500 Edible Plants Could Lead To A Food Secure Future