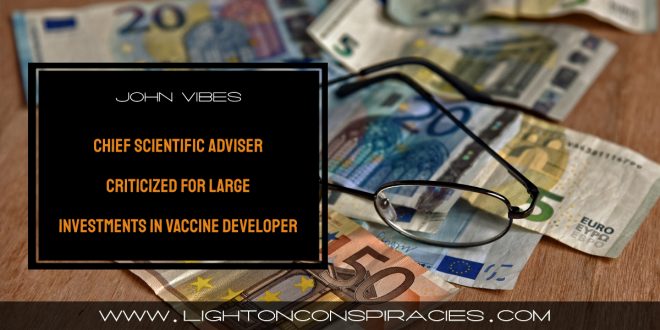 Sir Patrick Vallance, the Chief Scientific Adviser to the Government of the United Kingdom, has been accused of having a conflict of interest, after a recent report revealed that he has a £600,000 stake in GlaxoSmithKline (GSK), the pharmaceutical company that is working to develop a COVID vaccine for the UK government.

Vallance holds 43,111 shares in the company, but what is perhaps more alarming is how he got the shares in the first place. Before getting his job with the UK government, Vallance was the president of GlaxoSmithKline, which illustrates the revolving door that exists between government agencies and the multinational corporations that they claim to be regulating. When Vallance was appointed to the government, he sold £5 million worth of the company’s shares, but still retained a sizeable stake in the company.

GSK is not the only company working to develop a vaccine, there are more than 20 others, but they are certainly one of the leading brands.

A senior Conservative MP and ex-Cabinet minister told The Telegraph that Sir Patrick should have been more forthcoming about his investments in the company.

“The policy of this Government is to try to suppress Covid at every opportunity until we get a vaccine. That makes it more likely that a vaccine will be prioritised by the Government and he happens to be holding shares in one of the leading companies that are developing it. It is a potential conflict of interest,” the MP said.

“If he is making decisions on vaccines and advising the Government on them, then he either needs to divest himself of the shares or make a declaration every time he touches on the subject. In the Commons, every time MPs raise an issue in which there is a registered interest, they have to declare it. Every time he is talking about vaccines or on TV, he should put it on the table,” they added.

A spokesperson for the UK government issued a statement saying that the shares he holds are only a deferred bonus, and that he has followed all of the legal guidelines to avoid a conflict of interest.

“The GCSA has no input into contractual and commercial decisions on vaccine procurement which are taken by Ministers following a robust cross-Government approvals regime,” the spokesperson said.

Share
Previous “We Do Not Consent” — Thousands Rally In London To Oppose Another COVID-19 Lockdown
Next Exposed: There’s A New Federal Court To Handle All The Expected COVID Vaccine Injury Claims