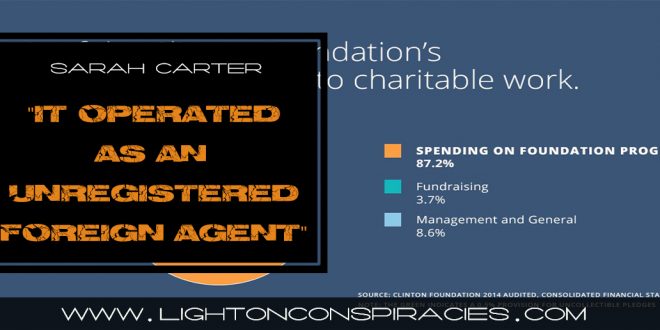 Authored by Sara Carter via SaraCarter.com

The Clinton Foundation operated as a foreign agent ‘early in its life’ and ‘throughout it’s existence’ and did not operate as a 501c3 charitable foundation as required, and is not entitled to its status as a nonprofit, alleged two highly qualified forensic investigators, accompanied by three other investigators, said in explosive testimony Thursday to the House Oversight and Government Reform Committee. 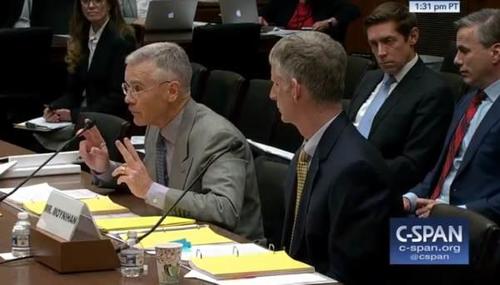 John Moynihan and Lawerence W. Doyle, both graduates of the Catholic Jesuit College of the Holy Cross and former expert forensic government investigators, gave their shocking testimony before congress based on a nearly two year investigation into the foundation’s work both nationally and internationally. They were assisted by three other highly trained experts in taxation law and financial forensic investigations. The forensic investigators stressed that they obtained all the documentation on the foundation legally and through Freedom of Information Request Acts from the IRS and other agencies.

Former Utah U.S. Attorney General John Huber, who resigned when he was appointed by former Department of Justice Attorney General Jeff Sessions to investigate the Clinton Foundation and the issues surrounding the approval to sell 20 percent of U.S. Uranium assets to Russia, declined to attend the hearing. Chairman Mark Meadows, R-NC, who oversaw the hearing stated that it was disappointment that Huber declined, leaving Congress in the dark regarding the DOJ’s investigation.

Investigations into the Clinton Foundation have always been plagued by politics but Moynihan wanted to make clear in his opening statement that this investigation was one of many his firm has conducted on nonprofits and had nothing to do with politics.

Doyle and Moynihan have amassed 6,000 documents in their nearly two-year investigation through their private firm MDA Analytics LLC. The documents were turned over more than a year and a half ago to the IRS, according to John Solomon, who first published the report last week in The Hill.

“The investigation clearly demonstrates that the foundation was not a charitable organization per se, but in point of fact was a closely held family partnership,” said Doyle, who formerly worked on Wall Street and has been involved with finance for the last ten years conducting investigations.

“As such it was governed in a fashion in which it sought in large measure to advance the personal interests of its principals as detailed within the financial analysis of this submission and further confirmed within the supporting documentation and evidence section.”

At the onset of the hearing, Moynihan wanted to make perfectly clear that the intention to look into the Clinton Foundation was not political but based on their work with the firm.

“At this point I’d like to answer two questions, who are we? We are apolitical,” Moynihan told the committee. “We have no party affiliation to this whatsoever, No one has financed us… we are forensic investigators that approached this effort in a nonpartisan profession, objective, and independent way…we follow facts, that’s all.”

“We have never been partisan,” he added, speaking on behalf of all five members of his group testifying to Congress. “We come from law enforcement and wall street where each of us has dedicated our entire lives and praised the rule of law doing the right thing pursuing facts. we follow facts. that’s all.”

“None of this is our opinion,” he went on state.

He disclosed the reason his firm decided to take on the Clinton Foundation and the fact that they paid for the investigation out of their “own pockets.”

“Are you doing this for money,” said Moynihan to the committee. “Yes, this is how we make a living.”

Moynihan and Doyle swapped back and forth between there testimony and opening statement, making it clear they were working as a team. But the most shocking statements came from Moynihan’s statement as he read the laundry list of violations by the Clinton Foundation.

Moynihan stated “Foreign agent,” as he began to read from a long list of violations discovered during the course of their investigation.

The Clinton Foundation “began acting as an agent of foreign governments ‘early in its life’ and throughout its existence. As such, the foundation should’ve registered under FARA (Foreign Agents Registration Act),” he said. “Ultimately, the Foundation and its auditors conceded in formal submissions that it did operate as a (foreign) agent, therefore the foundation is not entitled to its 501c3 tax exempt privileges as outlined in IRS 170 (c)2.”

Doyle, who was also outlining a litany of violations by the foundation, noted that currently there are approximately 1.75 million nonprofits in the United states that annually generate nearly 2 trillion dollars, which is 9 percent of the U.S. GDP.

“Whose minding the store, looking out for the donors and minding the rule of law,” said Doyle.

“On that note, we followed the money so we made extensive spreadsheets of their revenues and expenses, we analyzed their income statements and we did a macro-review of all the donors, which its a very (jumbled) sort of foundation,” said Doyle. “Less than 1/10th of one-percent of the donors gave 80 percent of the money. So we follow the money.”

Moynihan added that the foundation “did pursue programs and activities for which it had neither sought nor achieved permission to undertake.”

Particularly, he noted the case of the Clinton Presidential Library in 2004. He noted that the foundation’s role before and after library was built was a misrepresentation to donors “of the approval organizational tax status to raise funds for the presidential library programs therein. In these pursuits the foundation failed the organizational and operational task 501c3 internal revenue code 7.25.3.”

“Some may be deemed philanthropic, albeit unimproved, while other much larger in scope are properly characterized as profit oriented and taxable undertakings of private enterprise again failing the operational tests philanthropy referenced above,” Doyle said.

Philip Hackney, a tax law professor at Louisiana State University, who is a former Exempt Organizations lawyer at the IRS, and Tom Fitton, president of the conservative government watchdog group Judicial Watch also testified at the hearing. Judicial Watch has been at the forefront of fighting the Clinton Foundation in court to access documents requested by FOIA. Hackney and Fitton testified during the first panel of the hearing.