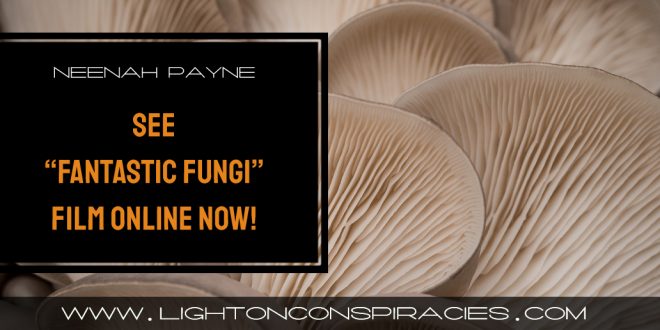 Note: This article is for informational purposes only and is not a substitute for medical advice, diagnosis, or treatment provided by a qualified healthcare provider.

Fantastic Fungi: How Mushrooms Can Heal, Shift Consciousness, and Save the Planet is an Amazon Best Seller. The Fantastic Fungi film by mycologist Paul Stamets and filmmaker Louie Schwartzberg won the 2019 Audience Award for Documentary Feature at the Maui Film Festival. You can watch the trailer, rent, and/or buy the film now at: http://watch.fantasticfungi.com/. The film is available in English, Spanish, French, German, Dutch, and Hebrew at: https://fantasticfungifilm.vhx.tv/products.

Mushrooms Create The Web of Life

Mushrooms are neither plants nor animals, but have traits of both and are most closely related to humans. Mushrooms heal us and the planet, enlighten us, and are the original world wide web of life that facilitates communication throughout the plant world and recycles life’s nutrients.

In the Organixx podcast “Boosting Your Immune System Using Mushrooms” which is no longer available, Jonathan Hunsaker, founder of Organixx, and TeriAnn Trevenen, CEO of Organixx, interviewed Dr. Daniel Nuzum, former chief formulator of Organixx products, about how to use mushrooms.

Dr. Nuzum explained that just as each person has a gut microbiome, the Earth has its own microbiome.
A “microbiome” is the community of micro-organisms (including bacteria, fungi, and viruses) that live in a habitat. Top soil is a microbiome with bio-activated nutrients – minerals from rocks. Topsoil consists of mineral particles, organic matter, water, and air. It is where Earth’s biological activity occurs.

Nature’s solution to pollution is dilution and the mycobiome is part of that process.

The largest mushroom in the world is armillaria ostoyae — or as it has been nicknamed the ”Humongous Fungus”. Covering 2,385 acres of Malheur National Forest, Oregon, it is the world’s largest organism. From the way the fungus has been growing, it may also be the world’s oldest organism.

Humongous is estimated to be around 2,400 years to 8,650 years old. Scientists mapped the population of Armillaria in eastern Oregon, the genetic material of the fungus, to determine where one fungus started and the other ended. The expanse of the forest and the stable environment has enabled the fungus to spread far. Known as honey mushrooms for their yellow cap and sweet, fruity bodies, they are safe to eat. The discovery of the giant mushroom has sparked a discussion of what constitutes an individual organism. However, it is agreed that if a being has a set of cells that are genetically identical and communicate with each other, it can be classed as one single organism. So, the blue whale and the Humongous Fungus both fit the bill.

The next largest honey fungus is in the state of Washington. Honey fungus is widely distributed across the cooler regions of the United States and Canada. It is very common in the forests of the Pacific Northwest. These fungi grow in individual networks of above- and below-ground fibers called mycelia. Mycelia work like a plant’s roots. They draw water and nutrients from the soil to feed the fungus. At the same time, they make chemicals that are shared with other organisms in the soil.

Is This The Secret To A Long And Healthy Life? talks about the Organixx 7M+ mushroom supplement.
It explains that mushrooms help slow down aging because they boost micro-nutrients, reduce inflammation, and provide antioxidants. It says that for centuries, the Japanese have understood the unsurpassed benefits of certain mushrooms.

The article points out:

In fact, the last 3 men to hold records for oldest on Earth were all Japanese… of the 100 oldest people living today nearly 30% are from Japan…one dietary factor stands out that is unique to the Japanese diet: for centuries, the Japanese have been consuming a variety of mushrooms. Mushrooms like Chaga, Shiitake, Reishi, and more.

They’re known to be some of the most powerful natural elements on Earth, and they’ve been a big part of the local diet in Okinawa for centuries. The benefits of mushrooms are known far and wide. The Japanese and other Asian cultures have cooked, made tea and other powerful elixirs to combat everything from inflammation to a poorly functioning heart. As it turns out, their love for these powerful fungi has translated into longer lives filled with youthful enthusiasm, boundless energy, strong immune systems, and a higher quality of life.

In the Organixx podcast “Boosting Your Immune System Using Mushrooms”, Jonathan Hunsaker discussed the body’s inflammatory response to stress. When you’re chronically inflamed, you are more susceptible to toxins and other assaults which can cascade into a downward spiral. The chart below shows that chronic inflammation can lead to a variety of serious illnesses.

Jonathan pointed out that since the problem involves a matrix of things, just taking a pill is not the best solution. A better approach is to increase your body’s capacity to deal with stress. That’s how you get well and stay healthy. Using mushrooms to build up your immune system is the opposite of the approach of a “pill for every ill” which doesn’t work on a long-term basis for a variety of reasons.

Cordyceps enhance your mitochondria’s capacity to use oxygen. The mitochondria are the power generators for your cells. The better they breathe, the more energy they produce. If your heart has more energy, it pumps more efficiently. Top 11 Health Benefits of Cordyceps Mushroom explains that the cordyceps mushroom is actually a combination of fungus… and CATERPILLAR!

In the video Paul Stamets | Mushroom Science NO Trace of Cancer, Stamets explains that in 2009 his 84-year-old mother Patty was diagnosed with stage 4 breast cancer. Her doctor said it was the second worst case she had seen in 20 years of practice — and gave her just three months to live! However, the doctor recommended Turkey Tail mushrooms!

So, Patty took the Turkey Tail mushroom supplement Stamets creates at his Fungi Perfecti firm along with the drugs Taxol and Herceptin. Stamets initially praised Taxol but later said that it’s a terrible drug. He explains in his fascinating presentation Mushrooms as Medicine with Paul Stamets at Exponential Medicine that of the 50 people in a Herceptin drug study in which his mother participated, 48 died. His mother was the only one who also took the Turkey Tail supplement! Patty was still cancer free as of the last report in 2018. Given that 1 in 2 men and 1 in 3 women is expected to get cancer, that is VERY big news. Although Stamets doesn’t say the Turkey Tail mushroom supplement cured his mother’s cancer – only that it helped – it looks like the drugs didn’t help! So, people can draw their own conclusions.

The 2016 CNN article The ‘forbidden fruit’ of medicinal mushrooms follows the story. In 7 Medicinal Mushrooms That Fight Cancer Ty Bollinger, host of The Truth About Cancer, says that Turkey Tail mushroom has anti-viral properties which offer a unique opportunity to target tumor viruses. 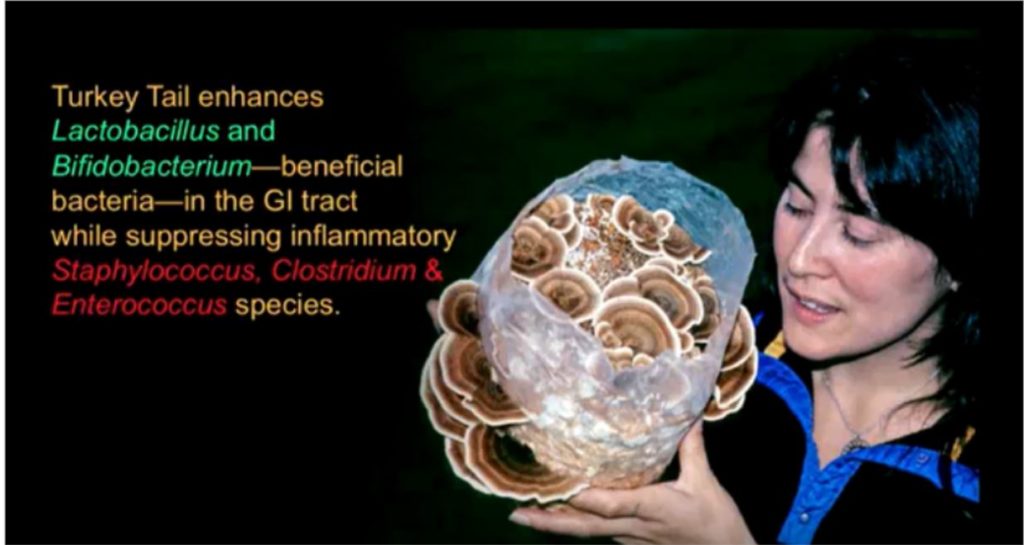 Why does Santa dress in red and white, come from the North Pole, magically drive a sleigh with reindeer flying through the night sky, carry a sack, and go down the chimney of each home to deliver gifts for Christmas? Why do we bring pine trees into our homes for Christmas and decorate them? Why do we hang socks by the chimney? For answers, see Could Magic Mushrooms Explain The Story of Santa Claus? and Santa is a ‘shroom. And the reindeer are all tripping. Also see Christmas, Amanita Muscaria, and Santa Claus. Finally, check out Shaman Claus: The Shamanic Origins of Christmas.

Like the Saami shamans, Santa Claus lives at the North Pole, dresses in red and white, rides magically through the sky in a sleigh driven by reindeer to deliver presents through chimneys Ho! Ho! Ho! In this way, Santa Claus preserves our connection to our shamanic roots — while hiding and disguising them. Instead of delivering the magic mushroom which is a pathway to wisdom and enlightenment through transcendental direct experiential knowledge, Santa Claus brings gifts we often don’t need or want — and ties us to the material world. Christmas turns a sacred holiday into a shopping season!

The mushroom provides Near Death-like Experiences that lead to the transcendence prized by shamans, which is also the root of all religions. The book shows the hidden representations of the mushroom in religious art and architecture around the world.

A New Understanding: The Science of Psilocybin is a must-see film. Check it out below!

Super Fungi explains that scientists are trying to learn how fungi make decisions in building their robust networks and hope to copy that approach to make human networks more resilient. The film features mycologist Paul Stamets who is perhaps the greatest ambassador for fungi!

Magic of Mushrooms is available on Amazon Prime in some locations and shows a wide variety of mushrooms in nature.

5 Stunning Health Benefits of Medicinal Mushrooms says there are more than 2,000 species of edible mushrooms. The article discusses some of the more common medical mushrooms: Lion’s Mane, Chaga, Reishi, Turkey Tail, Shiitake, and Cordyceps. However, it points out that even commonly-consumed Button mushrooms are medicinal!