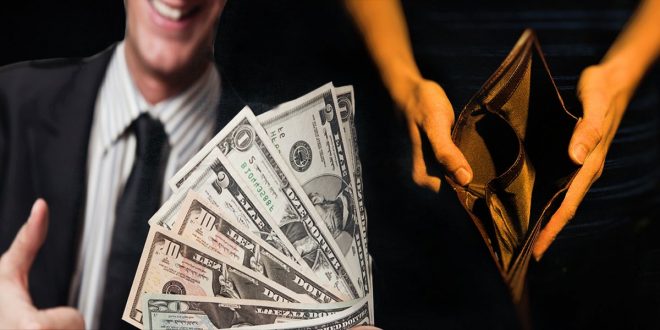 Time to Wake Up: 1% Thriving While 78% of Americans Live Paycheck to Paycheck

Though President Trump has lauded the booming stock market as evidence for a successful economy, a new report by Career Builder reveals otherwise. The top 1% may be thriving but approximately 78 percent of American citizens are living paycheck to paycheck. This means they have little to no savings in the bank, and are literally on the edge of being homeless.

The report also revealed that up to 71 percent of workers are in debt — an increase from 68 percent in 2017. Additionally, 56 percent believe their debt is unmanageable, and 54 percent of minimum-wage workers say they are required to work more than one job to make ends meet.
Career Builder surveyed more than 3,400 full-time workers across various industries and income levels for the report. The findings reveal that the stock market boom has done little to help those in the working and working-poor classes. In an analysis for the People Policy Project, Melissa Smith pointed out that “the stock market tells us about the prospects of capital owners, but it certainly doesn’t tell us much about the average worker.”
What the report reveals more than anything is that it is time to redistribute wealth. For decades, wages for most workers have remained flat. Meanwhile, compensation for CEOs continues to soar, reports Common Dreams. In fact, a recent analysis by the Economic Policy Institute (EPI) discovered that the pay of top CEOs rose by an astonishing 937 percent between 1978 and 2016. That’s outrageous, considering 43.1 million Americans — or approximately 13.5 percent of the nation’s population — lived in poverty (below their means) in 2015.Based on President Trump’s tax proposals, it is unlikely he will be the leader to remedy this conundrum during his 4-year term. However, something has to be done. As Randi Weingarten, president of the American Federation of Teachers, says, there is a huge need for “strong unions” and “an economy that works for us” all — not just the wealthiest.

Part of the boiling frustration that is being witnessed in America is due to the spoilt economic system. When two parents who each work 40 hours per week can barely afford to pay their house mortgage, keep the fridge full of food and meet school fees, the system is clearly broken. When the majority of the population realizes the extent of the problem, perhaps then people will become educated on potential solutions and march in the streets until basic securities are afforded to all.

THIS ARTICLE IS OFFERED UNDER CREATIVE COMMONS LICENSE. IT’S OKAY TO REPUBLISH IT ANYWHERE AS LONG AS ATTRIBUTION BIO IS INCLUDED AND ALL LINKS REMAIN INTACT.

I am Luke Miller, content manager at Truth Theory and creator of Potential For Change. I like to blend psychology and spirituality to help you create more happiness in your life.

Previous Welcome to the New Internet Order
Next Aspartame Is NOT Safe: