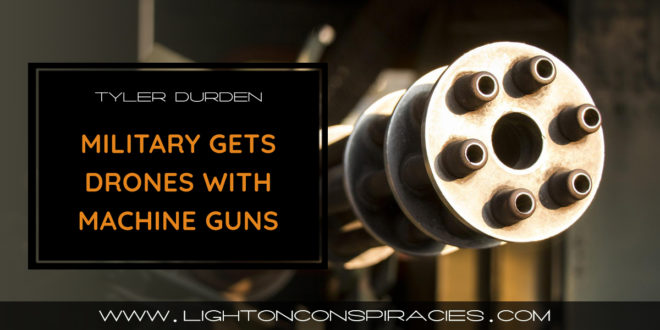 The Turkish military is about to take delivery of a fleet of 55-lb. drones equipped with a machine gun and 200-rounds of ammunition.

Made by Ankara-based firm Asisguard, the ‘Songar’ drone can strike a 6″ target at roughly 650 feet and has a range of 6.2 miles, and can operate in groups. A newer version is expected to be able to hit targets from over 1,300 miles away. Accoridng to Ayhan Sungar of Asisguard, a swarm of three Songar drones can be operated from a single remote control – with all three firing simultaneously at a target.

Held aloft by eight rotating blades, the drone uses a series of sensors, cameras and lasers to calculate distance, angle and wind speed – along with robotic arms that can help to deliver accurate fire on target with minimal recoil, according to New Scientist.

It is hard for a drone to shoot accurately, partly because of the difficulty of judging range and angle, and partly because the recoil from each shot significantly moves the drone, affecting the aim for the next round.

Songar has two systems to overcome these challenges. One uses sensors, including cameras and a laser rangefinder, to calculate distance, angle and wind speed, and work out where to aim. The second is a set of robot arms that move the machine gun to compensate for the effects of recoil. –New Scientist

While critics such as Robert Bunker of the US Army’s Strategic Studies Institute say the drones could end up in the hands of armed insurgents (which they will regardless), Songar says the drones will allow for new tactics, such as laying down suppressive fire while humans or other drones carry out attacks on other targets such as infrastructure or vehicles.

This article was sourced from Zerohedge.com

Share
Previous Operation Fast and Furious: The Forgotten History of the ATF’s Notorious Gunwalking Scandal
Next ‘The Calculated Subversion of Humanity’…and how to resist it