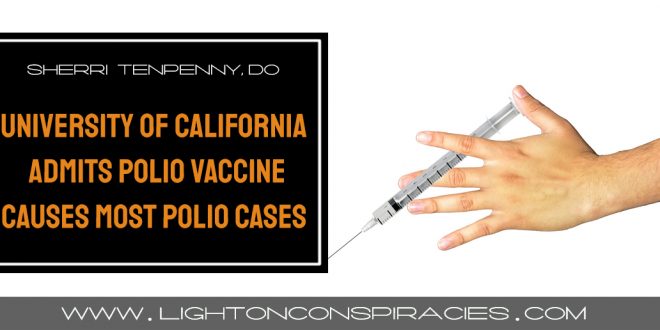 The polio vaccine has long been one of the most accepted forms of vaccination. Many people who staunchly oppose most vaccines don’t always oppose the polio vaccine.

However, a study out of the University of California has many people rethinking their views on the vaccine.

By June of 2017, only six cases of normal, or wild, polio had been diagnosed. This means that only six children contracted polio in a typical, normal environment. Counter that with 21 cases of polio derived from the polio vaccine and the numbers are shockingly scary. Much of this is linked to the polio vaccine’s oral version which seems to “get loose.”

“It’s actually an interesting conundrum. The very tool you are using for [polio] eradication is causing the problem,” says Raul Andino, a professor of microbiology at the University of California at San Francisco.

Although pharmaceutical companies have created “weaker” versions of the polio vaccine, it remains a live virus that if encountered, can infect a human.

The injectable version supposedly does not contain live viruses, but it’s too expensive to distribute, so world leaders have decided to instead, save money and create more polio cases using a polio spreading vaccine (I wish I were kidding).

Here’s the even worse news, a UCSF study has shown that the “weaker” polio live virus is actually quite formidable once released. In other words, it evolves into a strong version of polio once it is on its own. This means that a “weaker” live polio virus isn’t truly “weaker” at all.

“We discovered there’s only a few [mutations] that have to happen and they happen rather quickly in the first month or two post-vaccination,” Andino says. “As the virus starts circulating in the community, it acquires further mutations that make it basically indistinguishable from the wild-type virus. It’s polio in terms of virulence and in terms of how the virus spreads.”

And things are even worse. Back in June, the World Health Organization reported that 15 Syrian kids had contracted vaccine-derived polio.

“In Syria, there may be more cases coming up,” says Michel Zaffran, the director of polio eradication at the World Health Organization.

Shouldn’t there be accountability over such matters? You can’t hide behind philanthropy when the statistics show blatant disregard for human life and safety. That’s 27 polio cases that would have been only six polio cases without corporate interference.

Previous NWO Elite Have Controlled New Zealand since 1960’s
Next YouTube Blacklists Federal Reserve Information. It’s Up To YOU To Spread It!