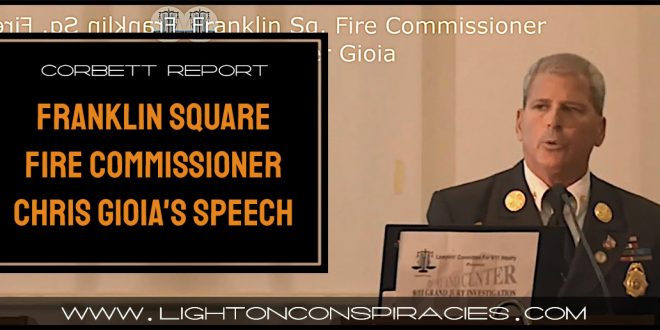 Read about the Lawyers’ Committee FBI Lawsuit & Grand Jury Petition here http://lcfor911.org Date of Event: September 7, 2019, NYC New York Area Fire Commissioners Make History, Call for New 9/11 Investigation by Ted Walter July 27, 2019 They started off by saying the Pledge of Allegiance. Ten minutes later, they were reading the text of a resolution claiming the existence of “overwhelming evidence” that “pre-planted explosives . . . caused the destruction of the three World Trade Center buildings.” And so it was, on July 24, 2019 — nearly 18 years after the horrific attacks that traumatized a nation and changed the world forever — the Franklin Square and Munson Fire District, which oversees a volunteer fire department serving a hamlet of 30,000 residents just outside of Queens, New York, became the first legislative body in the country to officially support a new investigation into the events of 9/11. The resolution, drafted and introduced by Commissioner Christopher Gioia, was unanimously approved by the five commissioners. Members of the audience — including the families of fallen firefighters Thomas J. Hetzel and Robert Evans, both Franklin Square natives — joined in solemn but celebratory applause after the fifth “ay” was spoken. Conversing with guests after the meeting, Commissioner Dennis Lyons remarked on the enormous and lasting toll that 9/11 has taken on the Franklin Square community. “We have a memorial — a piece of steel from the World Trade Center with 28 holes where the nuts and bolts used to go,” Lyons explained. “Every year on the 11th, we put a rose in each hole for the 24 Nassau County firefighters and four Franklin Square residents who died on 9/11.” Read More: https://www.ae911truth.org/news/540-n…
Please take a moment to support Ole on Patreon!

Share
Previous RANT: Now We’re Being Told We Have to Accept Literal Vampirism!
Next Alan Watts ~ If You Get One Lesson From Me, You Must Learn This