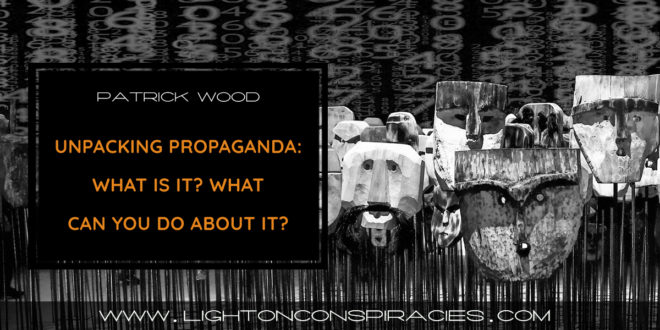 Unpacking Propaganda: What Is It? What Can You Do About It? America is awash with harmful and dangerous propaganda, but few people understand what it is, how it works and what can be done to overcome it. This article examines the nature, structure and intent of propaganda so readers can increase awareness and discernment.

According to The Graduate School of Political Management at George Washington University, “Since propaganda and public relations both share the goal of using mass communication to influence public perception, it can be easy to conflate the two. Propaganda, however, traffics in lies, misinformation, inflammatory language, and other negative communication to achieve an objective related to a cause, goal or political agenda.”

The Oxford English Dictionary states that it is “the systematic dissemination of information, esp. in a biased or misleading way, in order to promote a political cause or point of view.”

Modern propaganda was defined by Edward Bernays (1891-1995) in the early 1920s. Bernays is credited as being the “father of public relations”, but many of his ideas came from his uncle, psychiatrist Sigmund Freud. Neither were friends of society.

“Those who manipulate this unseen mechanism of society (propaganda) constitute an invisible government which is the true ruling power of our country… we are dominated by the relatively small number of persons who understand the mental processes and social patterns of the masses. It is they who pull the wires which control the public mind.”

The Intent To Deceive Is Never Right

While individuals can certainly lie and deceive on their own initiative, propaganda is invariably seen in the realm of governments and corporations that use instruments of mass communications to control behavior.

To be clear, all propaganda intentionally and deceptively manipulates emotions to create a change in personal and group behavior. Further, the most effective propagandists lay traps and defenses in advance for would-be critics.

Fortunately, recognizing propaganda is simple once you understand its time-tested techniques, all of which have been clearly identified and validated for many decades.

The following standardized propaganda techniques, recognized and well-documented by many authors and professional scholars, are used in various combinations to achieve a desired behavioral outcome.

The Techniques of Propaganda

Fear: The most powerful emotion, fear of loss or physical harm open the mind up to accept the solutions provided by the propagandist, that would not otherwise have been accepted. The technique of fear has been the foundation of all pandemic-related propaganda.

Bandwagon: A claim is made that because everyone else is doing it, so you should too. This is often combined with other propaganda techniques. “Everyone is taking the shot because it is safe and effective; you should take it, too.”

Card Stacking: This technique highlights the “good” information while leaving out the “bad”. In other words, only the facts that support the propagandist’s agenda are presented, while everything else is intentionally suppressed. Censorship is rampant in media, social media and search engines.

Plain Folks: The propagandist implies that he is just an ordinary person like you, with the same dreams and desires, and therefore you should believe him.

The Testimonial: Using an unrelated person such as a celebrity, to give testimony that the propaganda is true and that you can trust them to tell you so. They might also appear as “plain folks” described above.

Glittering Generalities: Sweeping statements that cannot be defined, often containing vague “virtue words”. e.g., “This program will create equity for all” and “We will create millions of green jobs with this budget.”

Name Calling/Deflection: Ad hominem attacks deflect attention away from the propagandist and toward someone else. Al Gore once said concerning global warming, “Deniers deserved to be punished.” Today, it is claimed that America has a “pandemic of the unvaccinated”.

Transfer: This technique carries over the authority, prestige or acceptance of another group or organization, thus transferring those characteristics over to the propagandist’s program. Many churches, for instance, have been used to promote acceptance of pandemic propaganda by their congregations.

False Analogy: Two concepts are falsely linked together without any cause and effect. For example, “People who question vaccines are anti-vaxxers; Mary does not want the vaccine, so she is an anti-vaxxer.”

Either/Or Fallacy: With “black-and-white” thinking, only two choices are given, even though there might be other acceptable choices. This polarizes the issue and forces you to accept the desired outcome. For instance, “You are either for science or against it.”

Faulty Cause and Effect: This technique suggests that because A follows B, A must cause B. For example, Joe supports gun ownership; murderers often use guns to kill people; therefore, Joe is a killer.

Euphemisms: This is the use of a word or phrase that pretends to communicate but doesn’t. If often makes the bad seem good or the unpleasant seem attractive. For instance, “You aren’t poor, you are economically disadvantaged.”

Loaded Words: Related to name-calling, the propagandist will use extreme words to describe ordinary circumstances. For example, parents who protest at school board meetings are now labeled as “domestic terrorists” who commit “hate crimes”.

Logical Disconnect: The World Economic Forum states, “You will own nothing and be happy.” This says that happiness is the result of owning nothing but this is totally illogical from experience. A corollary to this might well be “Homeless people own nothing, therefore they must be happy.”

What you can do about it

All these techniques target our emotions, which in turn drive our behavior. Without our emotional “support” and compliance, the propagandist’s efforts simply fall silently to the floor and die.

Of course, the intelligent citizen does not want anyone to manipulate his emotions for goals that are not his own in the first place. Indeed, no one wants to be fooled, tricked, duped, deceived, used or manipulated by someone else.

There are two very clear antidotes to stopping propaganda dead in its tracks.

First, the propaganda must be objectively identified and seen for what it is. With the techniques listed above, this is very easy to do.

Second, considering what you see, you must exercise self-control over your emotions. Propaganda always demands your emotional involvement to achieve its ends. Do not fall into the propagandist’s trap.

Lastly, when you finally claim victory over any element of propaganda – that is, you’ve identified it and refused emotional involvement with it – it is important to share your understanding and experience with others.

Keep this information handy whenever you are listening, viewing or reading the news. Analyze every article for its “propaganda quotient”. If you notice that one technique being used, take it as a clue and look for others.

If enough Americans understood these simple markers of propaganda, committing to stopping it in its tracks, then life in America could get better in a hurry.

Always remember, propagandists are self- interested, caring nothing about you or the public at-large. In order to overcome it, It is not necessary to know the full reason why it is being played out in the first place; the mere fact that it is propaganda tells you that you want nothing to do with it.

Throughout history, robust and often intense debates have been held between individuals of different opinions. You will find an abundance of such conflicts during the founding period of America. There were verbal arguments as well as publications that published differing ideas and opinions. In some cases, it produced quite a bit of anger and bitterness.

But was it all according to “Free Speech”?

The answer is found by examining the intent and quality of the exchange of ideas. A foul was called if one party intentionally lied or if key evidence was intentionally withheld to trick the other parties.

In other words, deceit was not tolerated. On one hand, those who deceive and lie with malice of forethought have the right to verbalize such things, but they must also bear the consequence of violating the law in doing so.

Bunko is a crime that cheats one person out of privilege or possessions through lying and misrepresentation.

Merriam-Webster defines fraud as an act of deceiving and “intentional perversion of truth in order to induce another to part with something of value or to surrender a legal right”.

The Merriam-Webster dictionary also defines propaganda as “the spreading of ideas, information, or rumor for the purpose of helping or injuring an institution, a cause or a person” and “ideas, facts, or allegations spread deliberately to further one’s cause or to damage an opposing cause”.

Georgetown University Law Center summarizes in the Law of Deception, “Many laws address deception. Familiar examples include: the torts of deceit, libel and defamation; the crime of theft by false pretenses and federal mail and wire fraud statutes; the Federal Trade Commission Act, the Lanham Act, and state unfair and deceptive acts and practices laws; laws prohibiting securities fraud and requiring issuer disclosures; the contract defense of misrepresentation; and the law of perjury.”

All this is to say that while Free Speech provides a great latitude of expression, it is always constrained by legal and ethical boundaries.

Is lying and deception Free Speech? No, never!

When propagandists hide behind the argument of Free Speech, they are using it as a propaganda technique to deceive you even further.